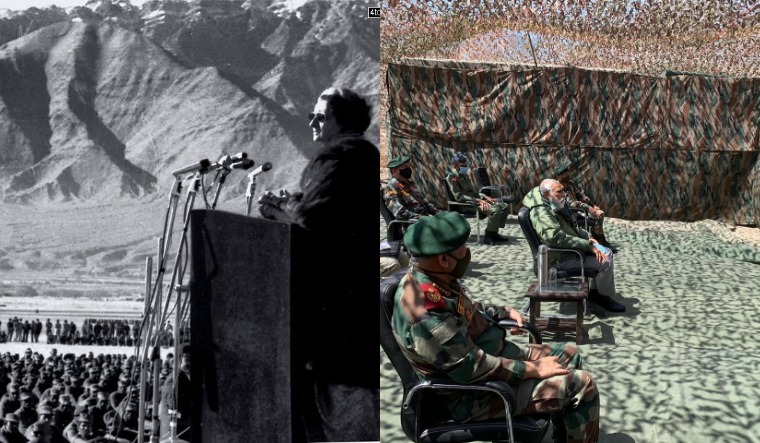 The 'surprise' visit to Ladakh by Prime Minister Narendra Modi amid the ongoing standoff with China has dominated news coverage for most of Friday. But it may not still be enough to some in the opposition Congress!

Modi's unannounced visit came hours after Defence Minister Rajnath Singh cancelled a scheduled trip to the region on Friday. The chiefs of the Indian Air Force and Army had visited forward areas in Ladakh in June where the Indian and Chinese militaries have been engaged in their biggest military standoff in decades.

Modi had been facing strident criticism from the Congress over the past two months, ever since reports of the first Chinese incursions across the Line of Actual Control emerged in May.

Congress leader Rahul Gandhi had been persistent in demanding transparency from the Modi government over the situation in Ladakh and had even targeted the government for not referring to China by name for instigating the clash at Galwan on June 15.

After she visited Leh she sliced Pakistani into two. Let us see what he does ? https://t.co/m7XfzNenE8 pic.twitter.com/i5iYnOc54J

On Friday morning, responding to news of Modi's visit to Ladakh, Congress MP and party national spokesperson Manish Tewari tweeted an image of former prime minister Indira Gandhi addressing Indian Army personnel at Leh in 1971. Tewari wrote, "After she visited Leh she sliced Pakistani (sic) into two. Let us see what he does?"

The image shared by Tewari of Indira Gandhi addressing troops had actually caused embarrassment for the Congress last month. Multiple Congress Twitter handles had shared the image, claiming Indira Gandhi had addressed Indian Army men at Galwan in 1971 in an apparent attempt to insinuate that Modi had not done the same. However, multiple fact-check websites subsequently pointed out that Indira Gandhi actually met Army personnel at Leh and not Galwan, which is around 200km away from Leh.

On Friday, multiple Twitter handles also shared an image of Jawaharlal Nehru visiting Indian soldiers at forward locations in the erstwhile North-East Frontier Agency during the war with China in 1962.