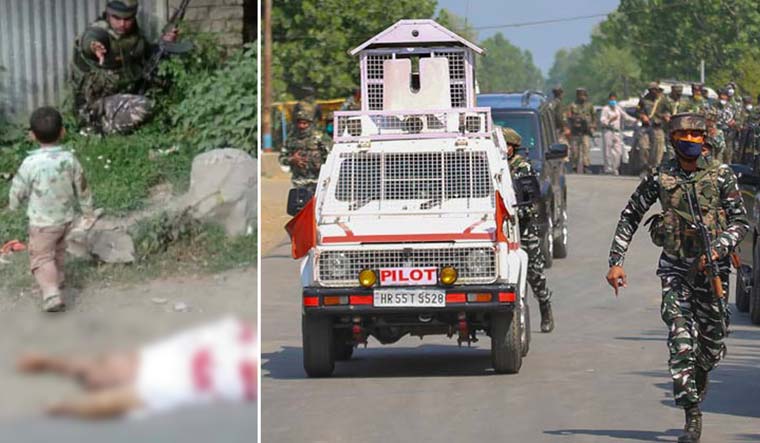 (Left) One of the viral images showing a three-year-old boy walking towards a CRPF personnel after his grandfather was killed in a terrorist attack, (Right) Security forces patrol in Sopore, Baramullah, following an attack on CRPF forces | Twitter, PTI

Amid outrage over viral images of a three-year-old boy, identified as Ayad Jehangir, seated on the body of his grandfather Bashir Ahmed at Sopore after an attack by militants on a CRPF checkpoint killed one jawan and injured three others, the IGP for Kashmir, Vijay Kumar, said the attack was carried out by Lashkar-e-Taiba——and denied allegations that the CRPF had killed the boy's grandfather.

“Today morning at 7.30 a.m. when the CRPF was going for a joint naka (checking) with police at Model Town at Sopore, militants fired at them from a mosque when they were deboarding from the vehicles,’’ Kumar said at a press conference.

“One CRPF jawan was killed and three [were] injured in the attack,” he said.

He said Ahmed was traveling in his car with his grandchild; after he stopped his car and tried to run to safety, he was hit by a bullet and died on the spot

He said the little boy was rescued by the SHO of Police, adding that the SHO should be appreciated for the act.

He said this is the second incident after the Pampore encounter where militants have misused a mosque's premises as part of their attack. He said he appeals to mosque managements to prevent the misuse of mosques by militants.

He said the militants were not even sparing children, with a child targeted in Bijbehara and now in Sopore. Kumar said that militants were attacking security forces at crowded places so that people come out onto the roads and create a law-and-order problem.

He added that more attacks by militants were possible in the coming days.

He said today the police did not suspend internet at Sopore to gauge the reaction.

“Videos of the incident were made to spread misinformation,’’ he said, adding, "If we had cut the internet perhaps videos couldn’t have been uploaded.”

He said the deceased’s man's son and daughter had given video statements accused the CRPF of killing their father.

In one of the videos, the deceased’s man son said he was told over the phone that his father was dragged out of his car by the CRPF and shot dead after the militant attack.

Kumar said if any person testifies that the CRPF killed the civilian, they would take action.

He said the search is on to nab attackers.

Asked how the pictures of the boy being rescued by the police went viral when there was no public movement at the time of the incident, the IGP said police rescued the boy who was near the body of his grandfather.

“Going to the operation area with mobiles is wrong. I will ensure police teams going for the operation do not carry mobiles along as that may pose threat to their lives. In 2018, many security forces personnel got killed while using their mobiles during duty hours, in standoff attacks,” the IGP said