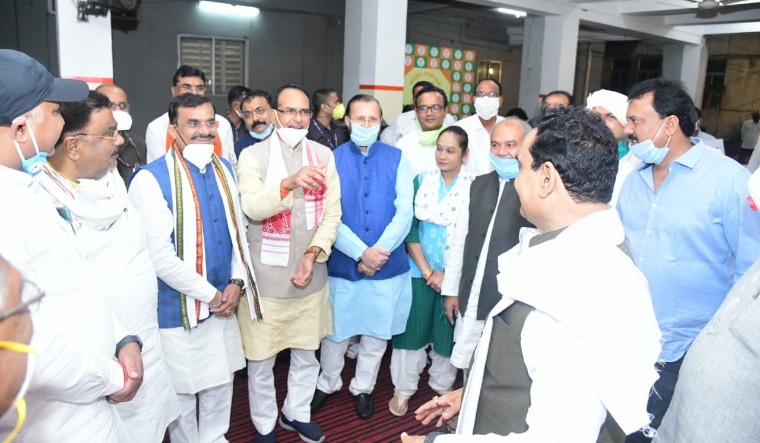 Though the equations in the elections to three Rajya Sabha seats in Madhya Pradesh look quite clear, some colour was infused into the proceedings on Wednesday night when two BSP MLAs, one SP legislator and two independent MLAs attended a dinner organised by the ruling BJP. The voting for the Rajya Sabha polls is scheduled for Friday.

Given the current seat strength in the Madhya Pradesh Assembly, the ruling BJP looks all set to win two out of the three seats up for the polls. The BJP has 107 members in the curtailed house of 206. The Congress has 92 MLAs. There are four independents apart from the lone SP legislator and two BSP MLAs.

A candidate will need 52 votes to win a Rajya seat in the current situation. Thus, BJP candidates Jyotiradiya Scindia and Sumer Singh Solanki look all set to make it to the Upper House, simply by the party’s own MLA strength. But the presence of SP, BSP and two independent MLAs in the BJP dinner meet gave the saffron party something more to show off.

Home Minister and senior leader Narottam Mishra tweeted the photographs of these non-BJP MLAs at the party dinner meet immediately after the event.

The images looked like rubbing the situation in to the Congress, which faced some speculations earlier during the day as some MLAs remained absent from its legislative party meeting. The number of absent MLAs was speculated to be between four and seven and the big focus was the reported absence of Lakshman Singh, the younger brother of Congress Rajya Sabha candidate Digvijaya Singh.

Digvijaya has been declared as the first-preference candidate by the Congress, meaning that the MLAs are expected to give him top priority during voting. The other candidate of Congress, dalit leader Phool Singh Baraiya, has a quite difficult path to winning at this time, unless there is cross-voting by BJP MLAs.

However, the Congress trashed the speculations, saying that four MLAs had remained absent from the meeting, with prior permission of the party president and they will be present at another meeting scheduled for Friday.

Sources said that the other absent MLAs were ex-deputy speaker Hina Kanwre and senior leader K.P. Singh, who had issues at home, apart from Kunal Choudhary, who has tested COVID-19 positive.

Meanwhile, the Indore bench of the Madhya Pradesh High Court on Thursday dismissed a petition by a social activist seeking deferment of Rajya Sabha polls in the state on the grounds that more than 10 per cent of seats were vacant in the Assembly. A videoconference hearing was conducted in the High Court, following which the petition was dismissed and the petitioner Aman Sharma was asked to approach the Election Commission of India with his plea.

COVID-19-infected MLAs can use postal ballots

Meanwhile, the Madhya Pradesh returning officer for Rajya Sabha Polls and State Assembly principal secretary A.P Singh on Thursday informed that consequent to the decision of the Election Commission, postal ballot facility will be available for those voters (MLAs) who have tested COVID-19 positive and are admitted to hospital. This facility will be available on advice of the doctors, and the MLAs will have to apply for this. However, in Madhya Pradesh, Congress MLA Kunal Choudhary, who has tested positive, has been given permission to cast his vote in a PPE suit after all other MLAs have exercised their franchise.