Talks at major-general rank had proved inconclusive on Wednesday 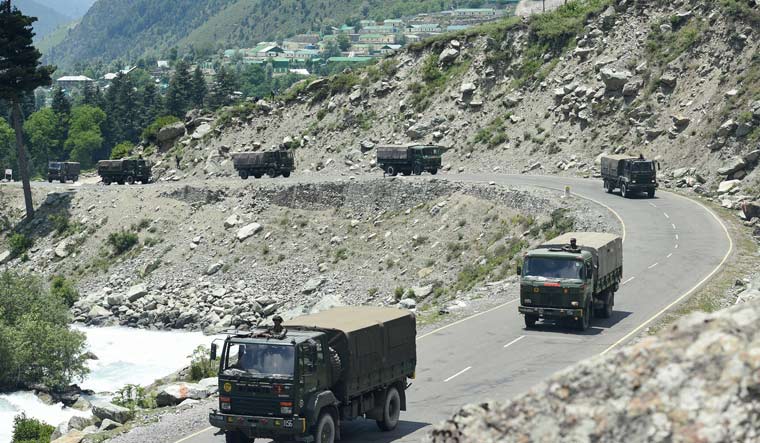 An army convoy moves along the Srinagar-Leh National highway, in Ganderbal district of Central Kashmir | PTI

The Indian and Chinese armies are continuing talks at the rank of major-general to address the flare-up in tension following a clash at Galwan on June 15. At least 20 Indian Army soldiers were killed in the clash at Galwan, which forced Prime Minister Narendra Modi to warn of a befitting response.

News agency ANI reported that officers of major-general rank will hold talks from 10.30am on Thursday to address the standoff at Galwan. Talks at major-general rank between the Indian and Chinese armies had proved inconclusive on Wednesday. “Talks between major-generals of India and China in the Galwan valley are over. The talks have remained inconclusive as no immediate disengagement or change in the ground has taken place,” news agency ANI reported on Wednesday.

The ministry of defence had mentioned that senior officers were holding talks to defuse the situation when it circulated its first statement on the clash on Tuesday noon. However, there is concern that talks at the military level would not yield results, necessitating political intervention.

Even as the talks at major-general level continue, media reports claim China is beefing up its presence in Galwan. The People's Liberation Army had on Tuesday claimed Galwan was part of China, a departure from its previous stance. Economic Times reported on Thursday morning "Satellite images from Tuesday show scores of vehicles used to transport troops, heavy construction equipment and tents for forward-deployed soldiers. Satellite imagery expert Col Vinayak Bhat (retd) says that the images indicate at least one combined arms brigade has been deployed along the river and the build-up has increased over the past few days."

In addition to the build-up at Galwan, Economic Times claimed China was boosting forces near "Gogra post, where the Chinese side has infiltrated at least 2 km across the LAC". "The Gogra post has also been brought under Chinese artillery range after the PLA moved ahead and deployed at least 12 guns on its side of the border. A tough situation also continues at the Finger area along Pangong Tso lake and the Depsang plains where PLA troops have been deployed in strength," Economic Times reported.

Meanwhile, the possibility of a quick diplomatic resolution to the standoff at Galwan remains unclear. On Wednesday, media agencies reported that a scheduled virtual meeting of the foreign ministers of Russia, India and China, planned for June 22-23, had been deferred. The meeting of the RIC ministers was expected to discuss issues such as the situation in Afghanistan and economic ties. However, Hindustan Times reported on Wednesday India was unlikely to join the meeting after the clash at Galwan.