District collector Dinesh Jain has ordered a probe into the incident 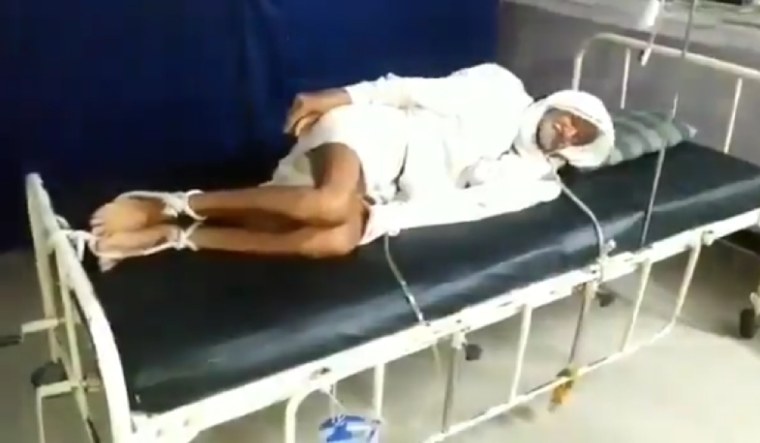 In a shocking incident, an elderly man was allegedly tied to a bed in a private hospital in Shajapur district after his family members failed to make payment of due medical bills.

While the family members have alleged that the elderly man was held hostage and wasn't given proper food for three to four days prior to the incident, the hospital administration has denied the allegation.

The chief minister Shivraj Singh Chouhan has, however, taken cognisance of the incident, calling it 'extremely cruel behaviour with a senior citizen in a hospital' and assured that those responsible will not be spared and stringent action will be initiated.

Ex-chief minister Kamal Nath meanwhile tweeted a video showing the frail elderly man tied to the hospital bed and commented that the behaviour meted out to the elderly man was inhuman and barbaric. He also said that the daughter of the man had alleged that her father had been held hostage by tying him up because they failed to pay the bills.

Kamal Nath said that the inhuman attitude and looting by the private hospitals continued unabated in the state amid COVID-19 crisis and demanded strict action against those responsible for the incident.

Sources said that the elderly man (name withheld) from Ranayar village in Shajapur was admitted to the private hospital after suffering from severe stomach ache five days ago. He had earlier been taken to district hospital and was referred for either Indore or Ujjain, but since the family did not have too much money with them, they got him admitted to the local private hospital.

The private hospital administration reportedly made the family deposit Rs 6,000 at the time of admission and then again Rs 5,000 on Wednesday. Left with no more money, the daughter of the man asked for her father to be discharged on Friday, but the hospital authorities asked her to pay dues of Rs 11,270.

When she expressed inability to do so, the workers at the hospital allegedly took the elderly man back and tied him to the hospital bed, telling the family to make the payment before leaving. Later, after the matter came to light, local people rescued the man late on Friday night.

Dr Varun Bajaj of the hospital has however denied the allegations before the local media. He said that the elderly man was suffering from brain fever and could not remain still. Therefore he had been tied so that intravenous medicines could be easily administered.

District collector Dinesh Jain has ordered a probe into the incident, asking the chief medical and health officer to submit a report soon.