Life in a 'cursed' land during a pandemic: The story of Churaman Nagar 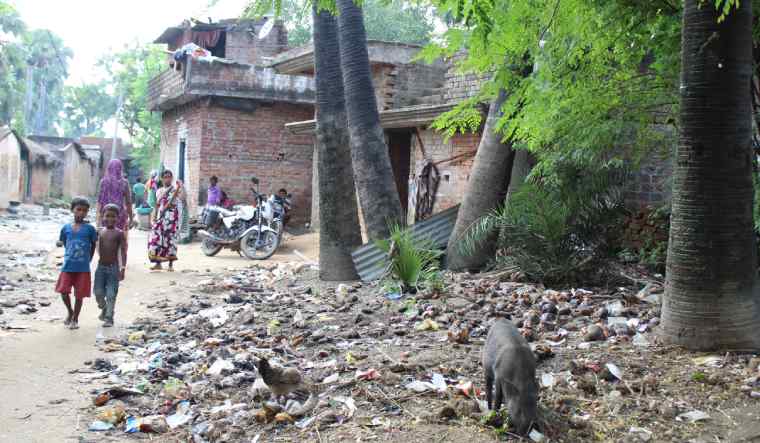 No one in Churaman Nagar remembers a time when there was no sickness. “When your land is cursed, there is nothing you can do”, says Kunti Chaudhary (58) holding up the only photo she has of her granddaughter Putus.

Putus, died a year ago. She was four and had never been able to get up or walk in her brief life. “One afternoon she went to sleep and never woke up. Like everyone else, she was swallowed by the water,” says Kunti.

Churaman Nagar is a hamlet of 142 households in Churi panchayat of Bihar. Its residents are Mahadalits—an umbrella term used for the state’s 22 most economically and socially deprived castes. It falls under Gaya district, one of the 11 in the state which report higher than permissible levels of fluoride in water.

The district laboratory puts this measure between 10-16 ppm (parts per million)—the latter figure standing at more than ten times the safety limit prescribed by the World Health Organisation (WHO). Fluoride is necessary in small measures (upto 1.5 ppm as per the Bureau of Indian Standards) for strong teeth and bones, but an overdose causes dental and skeletal fluorosis manifested in numerous debilitating health conditions ranging from osteoporosis to arthritis and from brain damage to thyroid disorders.

No medical tests were conducted on Putus to determine the cause of her death. But, in the land that Chaudhary calls ‘cursed’, at least one member of every household displays the most visible ill effects of fluoride contaminated water—yellow teeth and twisted legs.

In addition to all the health problems that fluoride has caused, it has also brought social ostracisation to Churaman Nagar. Kaaili Devi (51), who is unable to walk while her two youngest children Sravan (15) and Vichitra (17) have stunted growth and twisted limbs, says, “Our village has a bad name. Nobody wants to get married to our young”. 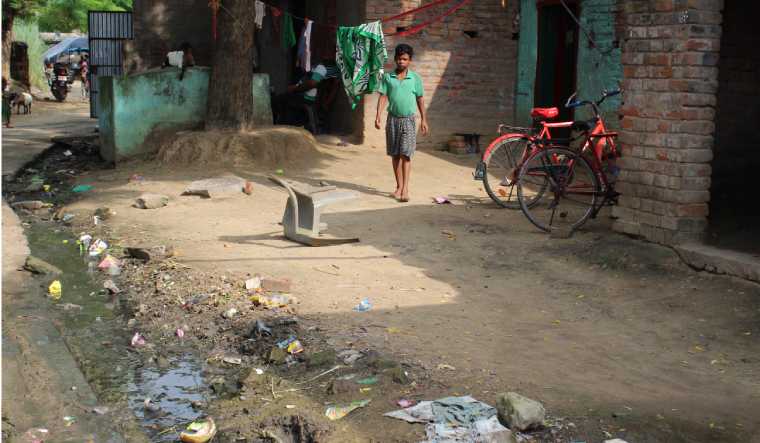 Some houses away from her, Guddu Kumar (14) displays the same symptoms. He says his physical appearance causes him great shame. “I stay at home. I don’t go to school. I don’t go out to play,” he says. His father Munsi Chaudhary says that they went as far as Patna to get him treated but when a doctor told them the only solution was to leave the village and stay elsewhere, they stopped. “We are poor people, how can we be expected to buy land,” he despairs.

Harendra Kumar (27), is the local tola sewak—a government appointed social worker in Mahadalit villages, whose job includes making communities aware of the welfare schemes they are entitled to. His brother Sumit (19) and mother Shivrani (47) both have twisted limbs.

He says, “What sense does it make to tell people like us to wash hands 10 times a day to ward off the coronavirus? The water we have to use is what makes us ill. It is also illogical to expect us to be able to afford so much soap”.

Scientifically, water used for hand washing evaporates within a matter of seconds. It is thus unlikely to be ingested, and cause harm, even if one has a meal immediately after washing hands. Experts say that any ill effects on the skin are rare and would take decades of prolonged use to be visible. But Harendra’s concern underlines the fact that health status is intertwined with the land one lives on.

In Churaman Nagar, where agricultural and construction labour is the most common livelihood, income levels hover between Rs 6,000 to Rs 9,000—leading to poor purchasing power. This means that nutritional status is compromised, and thus the body has limited capacity to ward off the ill-effects of fluoride. It also means that its residents lack the means of purchasing land and settling elsewhere. 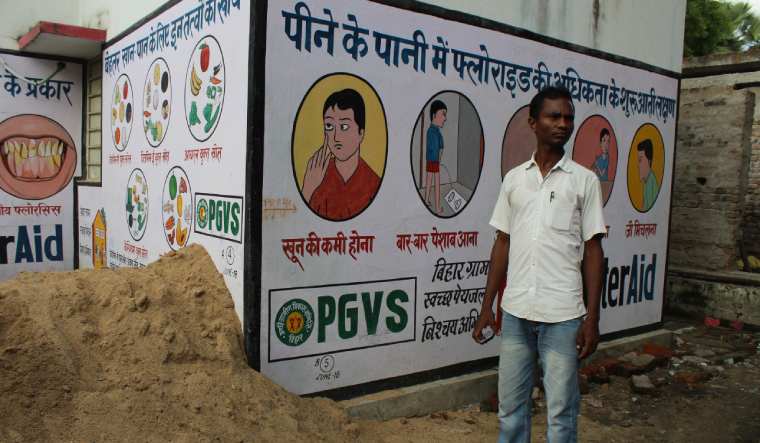 Contaminated water sources, low levels of awareness and now the psychological fear created by the pandemic have made health concerns more pronounced than usual. In Bihar, as elsewhere, land is a source of power and prestige. No one who has any, acquired legally or illegally, will give it up easily. Those who now live in Churaman Nagar, once lived in anther village called Chamundih, a kilometre away. When family sizes grew and the land there became insufficient, they were re-settled in Churaman Nagar, under the state government’s Privileged Person’s Homestead Tenancy Act, 1947—a scheme that gives three decimals of land (approximately 1306 square feet) to every landless household. Initially 23 families were brought to the village. Slowly some others—family and relatives from the same castes joined them. Kunti’s family was one of the later entrants from a neighbouring village called Bahadur Bigha.

Prosun Bhattacharya, Professor of Groundwater Chemistry at the KTH Royal Institute of Technology, Sweden, an expert whose work in fluoride contamination has spanned India, Bangladesh and Tanzania says, “Land is a part of geology. Geological concerns cannot be separated from land tenancy”.

But, poor communities have little control over where and what kind of land they get to live on.

“Land given to the landless is often on the outskirts of villages, on barren tracts, unoccupied by anyone else. The objective is to just give land regardless of whether that land will support a healthy life”, says Pankaj Kumar, Patna-based programme officer of Water Aid, an organisation which focuses on water, sanitation and hygiene.

The fluoride in Churaman Nagar’s water comes from both natural and man-made sources. It is trapped in the rocks of Pretshila, the hill on whose base the village is nestled. Decades of overexploitation of water for irrigation means the village’s three handpumps draw water from at least 70-90 feet, levels at which fluoride occurs in the region. The water carried by the piped water line constructed by the Panchayati Raj department is similarly unsafe for drinking or cooking. The only source of safe water is a dug well which becomes dry during the summer months, had no boundary till recently, and thus was at high risk for microbial contamination.

Ten years ago, the district’s Public Health and Engineering Department (PHED) set up a fluoride removal plant (FRP) in the village. It soon became non-functional due to poor operation and management.

Suresh Kumar Rohilla, Senior Director, Water and Wastewater Management, at the Delhi based Centre for Science and Environment says, “The great problem with the water works departments in our country is that they are staffed by mechanical and civil engineers who have expertise only in laying pipelines. They have no hydrologists, doctors, groundwater or other experts to look at the quality of water being supplied”.

Rai Sanjeev Sahay, the Superintending Engineer of Gaya’s PHED cannot specify any COVID-19 programme for the district’s fluoride affected villages. “As elsewhere in the state, people have been given soaps”, he says.

Since May 2018, Water Aid’s interventions in Churaman Nagar have included building awareness, the setting up of a FRP, building a boundary around the well and assisting the community to set up a rain water harvesting structure with a capacity of 86,000 litres. These have made little difference.

Bhattacharya says, “Our work shows that communities do not willingly adapt to defluoridation (reducing the levels of fluoride in drinking water) because of the work involved in maintenance. Providing an alternative source of water, such as through rainwater harvesting, too might not work as they would not find such water aesthetically pleasing.”

According to Bhattacharya, a complete approach should include enhancing the responsiveness of service providers in the water sector as well as training medical practitioners and health workers at all levels to correctly diagnose manifestations of high fluoride. (Sravan and Vichitra for instance were treated for weakness by a local medicine man, and then for polio by a health practitioner says their mother).

The most potent change however would come from the community taking charge for its well-being. This would require changing the mindset of Churaman Nagar’s residents.