The Congress was quick in demanding the resignation of Josephine 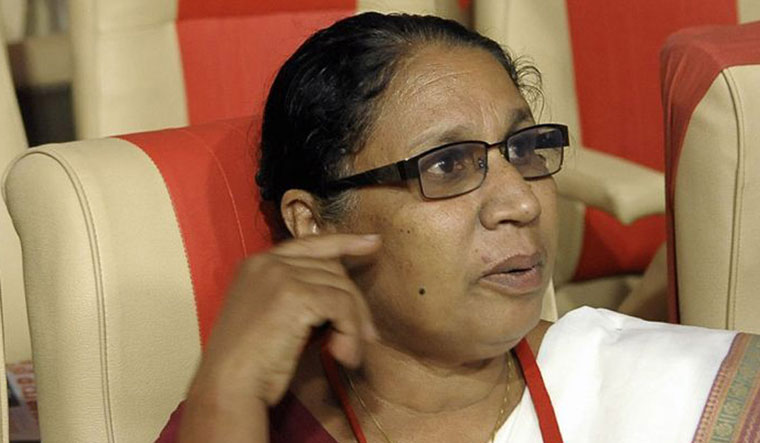 Kerala State Women's Commission chief M.C. Josephine on Friday courted controversy when she said the commission has taken action in cases against CPI(M) leaders in an impartial manner, and her "party" was also functioning like "a court and a police station”.

The Congress was quick in demanding the resignation of Josephine, who is also a CPI(M) central committee member, from the post of state's women's panel chief.

Opposition Congress leader Ramesh Chennithala said Josephine who heads a quasi-judicial body has made a comment violating the principles of the Constitution.

"A women's panel chief,who says that CPI(M) means court and the police, has no credentials to occupy that position. She has made anti-constitutional statements while heading a quasi-judicial body, which is completely unacceptable," Chennithala said in a release.

While talking to the media after visiting a gang-rape victim in Thiruvananthapuram, the women's panel chairperson got irked at a question posed by a reporter on the commission's stand on certain cases against CPI(M) leaders.

"I may be the chairperson of the state Women's Commission, but I am from the communist party. No other party, other than mine, will take stern action in cases against women. I know which case you are

mentioning. In that case, the family members, who are party followers, told me that they need the decision to be taken by the party," she said in an apparent reference to a case involving senior CPI(M) leader and MLA P.K. Sasi.

"Our party is court and a police station. No leniency will be shown towards any leader in that regard,"

Josephine, who is serving as the women's panel chief since March 2017, said.

The ruling CPI(M) in Kerala had, in 2018, suspended for six months Sasi, its Shoranur MLA, against whom sexual harassment charges were levelled by a woman party worker.

Sasi was suspended from the CPI(M)s primary membership after it was found that he had conversed with a woman worker "in a manner not befitting a party leader."

A woman Democratic Youth Federation of India (DYFI) leader had accused Sasi of trying to sexually abuse her following which the party had initiated a probe.

The women's commission had then said that a case in the matter will be taken only if the woman had come out in public or filed a police case.