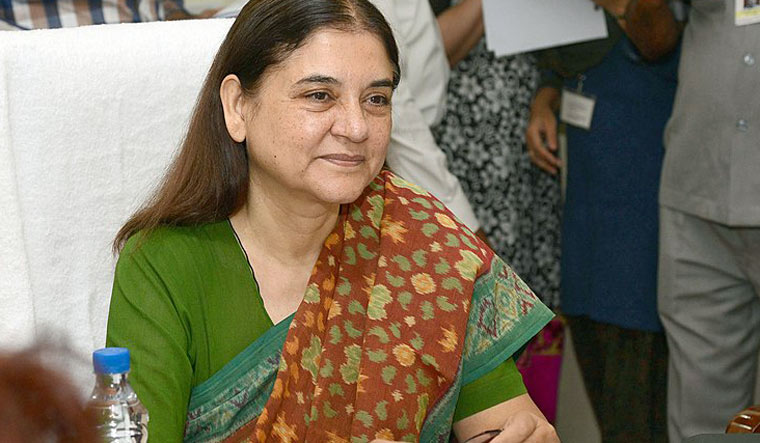 The Kerala police has registered a case against BJP MP Maneka Gandhi for her alleged provocative remarks in connection with the death of a pregnant wild elephant in Kerala's Palakkad district on May 27.

Investigations were on in the case, the officer said, adding that six complaints have been received against her.

The former union minister came under attack after she tweeted that Malappuram district was known for "its intense criminal activity" especially with regard to animals.

"Malappuram (sic) is known for its intense cirminal activity specially with regards to animals. No action has ever been taken against a single poacher or wildlife killer so they keep doing it," she said.

The official website of the People for Animals (PFA), an animal rights NGO founded by Gandhi, was hacked on Friday by a group of "ethical hackers" over her remarks.

Meanwhile, in a major breakthrough, one person was arrested in connection with the incident, and hunt is on for two more absconding accused, according to police and wild life department sources.

The accused, Wilson, is a rubber tapper. As per the statement of the accused, potassium nitrate was filled into a coconut and left on the boundary of a rubber plantation,on the forest fringe.

The 15-year-old elephant was suspected to have consumed a pineapple filled with powerful fire crackers, which exploded in the animal's mouth.

People do this for hunting wild boars for meat and the elephant had accidentally come across the bait, Manarkkad Range forest officer Ashique Ali U, told PTI.

There are two more accused in the case and they would be nabbed soon, Palakkad SP G. Siva Vikram told PTI.

Chief Minister Pinarayi Vijayan had assured stern action against those responsible for the incident after a social media storm erupted over the brutality meted out to the elephant.