What to expect at Modi, Australian PM Morrison's 'virtual summit' 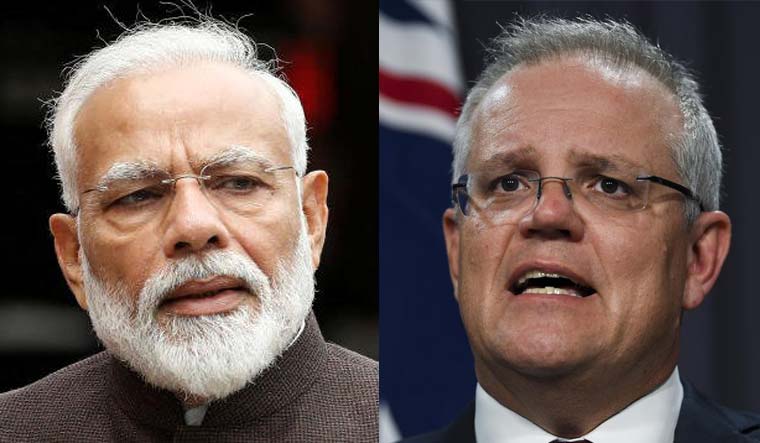 There will be no hugs. But India and Australia will inch closer than ever on June 4 when Prime Minister Narendra Modi meets his Australian counterpart Scott Morrison, in a virtual summit. A major outcome of India’s first virtual meet with Australia will be the signing of the Mutual Logistics Support Agreement in defence, paving the way for enhanced military cooperation.

The virtual conference will give the two countries a chance to envisage a more “ambitious agenda’’. On the cards, apart from the Mutual Logistics Support Agreement—which has been described by O’Farrell as the kind that Australia has with its “strongest allies’’—will be cooperation on health, education, maritime security issues. There will also be an emphasis, especially after the two countries have come together to support reform at WHO, on further reform of multilateral institutions across the world.

The signing of the agreement, will make it easier for India and Australia to conduct more complicated military exercises like AUSINDEX. While Australia has been keen on participating in the Malabar Naval exercises, so far India, has been less than enthusiastic. On being asked about whether Australia would raise the issue with India, O’Farrell said it was for India to make the decision, adding that the focus on Malabar exercises often takes away from the depth of the India-Australia defence ties.

The virtual conference also comes at a time when China has chosen to become more assertive; whether it is at the South China Sea, or on the Indian border. Will China come up? While a statement on maritime security is expected—both countries are committed to free, open secure Indo-Pacific—the dragon will be referred to obliquely. It was critical for “like-minded democracies to work together to shape the type of world we want,’’ said the High Commissioner, during COVID-19 and post the pandemic.

What can be expected, however, will be collaborations in research in science and technology, education, cyber security, water and minerals. Australia is also hopeful for better trade ties. “We will continue to explore ways of capitalising the progress made by both countries during the broader RCEP talks,” O’Farrell said.