Gurgaon and Delhi Police switched between sealing and unsealing of borders 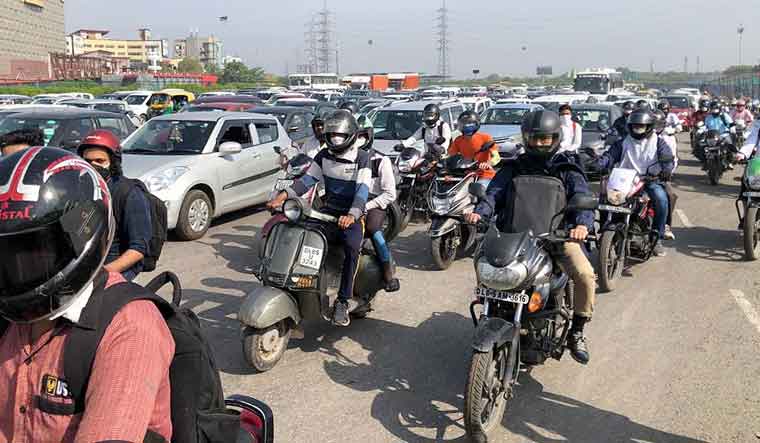 By afternoon, however, the Gurgaon Police relaxed norms, but by then the Delhi Police began to be strict with passengers | Aayush Goel

While home ministry may have given the go-ahead for free interstate travel during lockdown 5.0 or unlock 1.0, the Gurgaon-Delhi borders continued to be the bone of contention. Chaos and confusion continued at the borders on Monday as there have been no clear directives on interstate travel, with Gurgaon and Delhi Police switching between sealing and unsealing of borders. While the Gurgaon borders were sealed in the morning, Delhi closed its borders in the afternoon, leaving commuters hassled.

Chaos is expected to persist, as despite Haryana promising to open its borders, Delhi Chief Minister Arvind Kejriwal announced sealing of its borders for a week. However, the police is yet to receive an order in this regard.

Despite Haryana Home Minister Anil Vij declaring de-sealing of all borders with Delhi on Sunday night, Gurgaon Police maintained restraint on borders, allowing only the essential services and those with passes to enter. The cops went on to block Expressway flyover, diverting Delhi bound traffic to toll booths. 'Naakas' were erected at the entrance and only those who had passes were allowed. The pass inspection had led to a massive traffic jam and there were heated altercations between the police and passengers.

The situation was worse at Kapashera border that was virtually impermeable in the morning and vehicles were diverted to the Sirhaul border on Expressway. The cops cited containment of nearby village Dundahera as the reason for sealing the border.

By afternoon, however, the Gurgaon Police relaxed norms, but by then the Delhi Police began to be strict with passengers. Following Kejriwal's announcement of sealing Delhi borders with UP and Haryana, the Delhi Police got into a pass checking frenzy at the border, leaving commuters a harried lot.

Soon, social media was abuzz with rumors of the Delhi government not allowing even exit without passes, forcing people to dash back home. Confusion continued for two hours, but as there was no written orders from the Delhi government, the police allowed the commuters to cross borders. The chaos however left people fuming.

“This is worse than lockdown. One allows, the other restricts. Going for a job has become a struggle for us. Every day we live in fear of being stranded on one side of the border. There should be a clear decision for once so that the common man is not troubled,” said Ritesh Punia, a Delhi resident working in Gurgaon.

The Gurgaon Industrial Associations are also up against the ongoing chaos.

“We have not been able to restart properly since the last two weeks. We have no idea how many workers will come. Will our raw material reach or not? Till now Haryana was playing a sealing game and now Delhi has started. The industries need clarity as we are facing huge losses. Why can't they sort this out?” said Ghanshaym Mangla, a garment exporter from Udyog Vihar Gurugram.