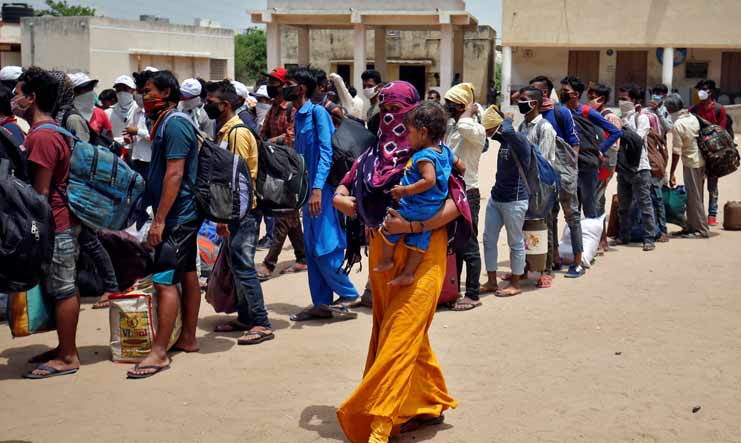 A woman holding her child walks to get on a bus to reach a railway station to board a train to her home state of northern Uttar Pradesh, in Ahmedabad | Reuters

On May 29, India registered a record jump of 7,466 cases, in keeping with the upward trend of cases since the lockdown measures were eased. However, a closer look at the data reveals that the spread of cases is not uniform—70 per cent of the cases are from 30 districts in the country, where population density is high and living conditions for the urban poor especially, may not allow for social distancing measures.

According to the covidindiaupdates, a data tracker site for COVID-19 by field epidemiologists of ICMR-NIE, Chennai, these districts include Mumbai, Delhi, Chennai, Ahmedabad, Thane, Pune, Indore, Jaipur, Kolkata, Surat, Bhopal, Aurangabad, and Jodhpur. Other districts include Hyderabad, Nashik, Vadodara, Raigad, Agra, Chengalpattu and Ujjain. According to those working on collating this data, district-level data for Delhi was not available from the state.

The high concentration of cases in a few areas has also been highlighted by an analysis of India's district-level data in a blog post in the British Medical Journal on May 28. According to Ashish Awasthi and Dileep Mavlankar, authors of the analysis, over half of the cases—67.2 per cent—and mortality (77.2 per cent) are concentrated in 20 districts of the 739 districts in India. Awasthi is assistant professor, biostatistics at Centre for Chronic Conditions and Injuries, Public Health Foundation of India, and Mavlankar is director, Indian Institute of Public Health, Gandhinagar.

The data set used by the authors is covid19india.org, a crowdsourced platform for COVID-19 data in India. The authors argue that these 20 districts have only 10.5 per cent of the country's 1.35 billion population of India, but have the highest proportion of cases.

"We also observed 50.8 per cent of cases, and 53.2 per cent of deaths of COVID-19 are concentrated in only five cities of India: Mumbai, Delhi, Ahmedabad, Chennai, and Thane, having only 4.4 per cent of the Indian population," the authors say in the blog. They also link the high burden in these areas due to an international airport, or major financial or tourist hubs, with a population density of 1,036-28,220 persons per square kilometre in urban areas. "All the major COVID-19 hotspot districts are urban, and 15 out of 20 districts have more than 50 per cent urban population," they say.

Mumbai has the highest COVID-19 burden, and over over 31 per cent households of Mumbai reported more than four persons sleeping in a single room. In several settlements in Mumbai, access to a toilet, with several people using a single toilet, had been found to be a major hindrance in preventing the spread of the disease.

In their analysis of the death rate per million, the authors argue that India's COVID-19 death rate of 3.4 puts it in a "good position" when compared to Belgium (805 DPM), Italy and United Kingdom (545 DPM), France (437 DPM) and several other countries. A total of 130 countries have death per million more than Indian average. However, comparing India's death rate with other countries also needs to be seen in context of the demographic profile of those countries (younger versus older people), as well as the fact that under-reporting of death is happening in states such as Delhi.

In 10 of top 20 districts, death rate is higher than national average and maximum in mega cities such as Ahmedabad (87 DPM) and Mumbai (85 DPM), which is more than 25 times the national average, the blog states. "In our analysis, high urban proportion and population density were significantly correlated with the COVID-19 burden in districts having the highest burden of COVID-19. It seems COVID-19 is spreading only in a limited number of large cities/districts with high population density. A tiny proportion of the cases are in rural areas or small cities and towns," they say.

During the course of the pandemic, epidemiologists in India have said that more specific, localised data—down to wards, taluks, streets—would enable better decisions and control measures.

The authors also argue for more granular data—given that districts are large entities—thereby enabling better policy decisions especially on how to ease restrictions. "Declaring an entire district as a red zone (high case burden) or orange (moderate case burden), and locking down the whole district may risk other health services as well as closing all social and economic activities will have major financial burden," they say. "..more granular data at the ward level in cities and sub-district level in the rural area, together with local policy flexibility at a lower administrative level, might help achieve better control," the authors recommend.