Chinese troops are believed to have camped in areas along Galwan river, Pangong Tso 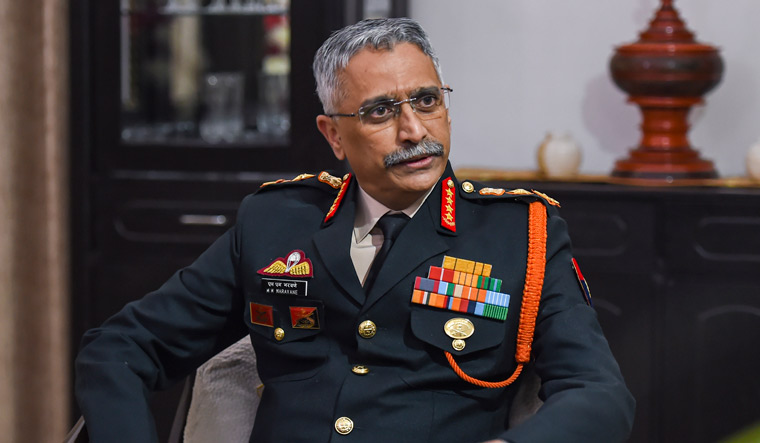 Indian troops are engaged in an eyeball to eyeball situation with the Chinese military on the "disputed border". And the latest stand-offs between two sides on the dispute border in Ladakh sector have been serious since the Doklam episode in 2017.

After local field commanders of both sides failed to defuse the tension, Indian Army Chief General M.M. Naravane rushed to the Army's Leh-based 14 Corps headquarters to review the situation on the border. The 826km-long boundary on Eastern Ladakh between India and China has been on the edge for over one month.

According to official sources, the Army chief did not go to the forward areas, but was briefed in detail by Northern Army Commander Y.K. Joshi and 14 Corps commander Lt General Harinder Singh.

Tension between the two sides escalated after the May 5 incident when Indian and Chinese troops were engaged in a face-off in the Pangong Tso area. Several soldiers of both sides sustained severe injuries during the clash. Soon after the stand-off, a Chinese military helicopter was seen flying close to the border. In response, the Indian side also dispatched its frontline Sukhoi 30 fighter jets. After Pangong Tso, Chinese troops intruded into Indian side of Line of Actual Control (LAC) in Demchok and Galwan valley in Ladakh sector.

According to defence sources, Chinese troops have pitched tents on Indian side of LAC on Galwan river and Demchok areas. It is believed that Chinese troops had objected to road construction activities in the DBO and Galwan Nala (river) area. Large presence of Chinese troops in the area is seen at four points on the Galwan River between Patrolling Point 14 to a location called Gogra on the LAC.

An estimated 4,000-5,000 Chinese troops are believed to have camped in areas along Galwan river and Pangong Tso. Though, in response, the Indian Army has also rushed additional troops for the forward locations to monitor the situation. Officials in the security establishment claim that the massive build-up on the Demchok is possibly for big construction activities. Normally, they (Chinese) come in the area only for patrol and move back. Huge presence of the Chinese was seen last time in Doklam area in summers of 2017. Last year in July, Chinese soldiers came close to Indian side in Demchok area, when some locals were celebrating the birthday of Dalai Lama.

Ministry of External Affairs issued a carefully worded statement by stating that "Indian troops are fully familiar with the alignment of the Line of Actual Control in the India-China border areas and abide by it scrupulously." MEA accused that, "in fact, it is Chinese side that has recently undertaken activity hindering India’s normal patrolling patterns. Indian side has always taken a very responsible approach towards border management".

On the other side, the Chinese side has taken an aggressive stand on the issue. Global Times, mouthpiece of the Chinese government claimed that the Indian side is raising the border issue to deflect attention from its "poor handling of the COVID-19 pandemic". Warning Indian military, the People Liberation Army (PLA) said "if India exaggerates the friction, the Indian military will have to pay a heavy price for it."

Early this month, troops from both sides were involved in a brawl in Naku La in Sikkim, in which several injuries were reported on both sides. Interestingly, Naku La does not figure in the disputed and sensitive areas that witness frequent transgressions and face-offs between both troops.

"Chinese military do have the tendency to assert its claim on the LAC. Though, they are entitled to do whatever they do in their territory, but not on the 'disputed' area," an official added. Demchok sector is one of the 23 “disputed and sensitive areas” on the LAC, stretching from Arunachal Pradesh to Ladakh region. The other sensitive areas in Ladakh include Trig Heights, Dumchele, Chumar, Spanggur Gap and Pangong Tso, and Namkha Chu, Sumdorong Chu, Asaphila, Dichu, Yangtse, Fish Tail-I & II in Dibang Valley in Arunachal. Barahoti, Kaurik and Shipki La come in the middle sector.