OPINION: How Modi's Atmanirbhar Bharat reminds us of Ambassador car

Retired civil servant M.P. Joseph argues ‘Make in India’ itself was a copy 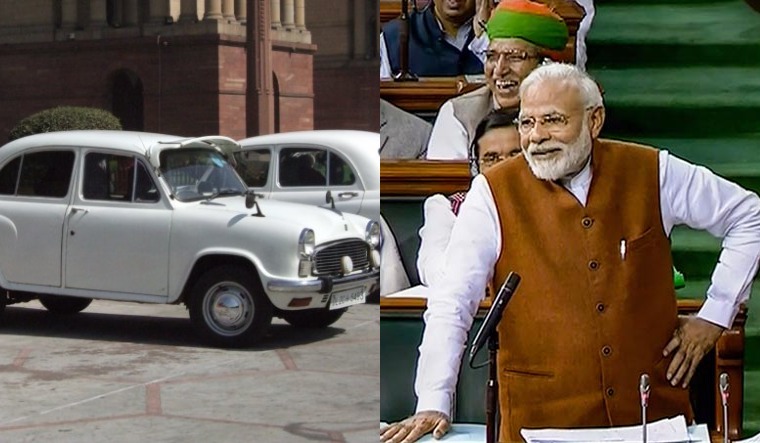 Those who are a few decades old will remember the Ambassador car. An Indian version of the Morris Oxford car, the Ambassador was India’s workhorse, until Maruti stepped in. Later, when the market was hit with an avalanche of cars with unpronounceable names, the Ambassador died a much delayed death.

It was a solid car. And like anything that is solid, the Ambassador did not change with time. The Model that Hindustan Motors, its manufacturer based in Calcutta—don’t roll your eyes at me, it was Calcutta then—first introduced in the mid-1950s was called Landmaster. Then a few years later and with some significant changes, the car was rechristened Ambassador. Thereafter, the car continued on Indian roads, until that avalanche of new cars in the market killed it.

I can only remember up to Mark 4: I think that was when the Ambassador got annihilated in a liberalised economy.

When I heard of Narendra Modi’s Atmanirbhar (hope I got that spelling right!) Bharat, which he said was his effort at moving India to a stage of self-reliance, did I hear a shade of Trump’s ‘America First’ there? I was also reminded of the Ambassador.

Modi may have forgotten it, but only five years ago, in 2015, he had said the same thing. At that time, it was not called Atmanirbhar Bharat, but ‘Make in India’.

See, you have also forgotten it!

And it is that short memory that we, the people of India, have, that Modi is banking on: Calling his 2015’ Make in India’ the Atmanirbhar of 2020. The wine is the same, only the bottle is different. Not very different though. For if you listen closely, Atmanirbhar sound almost like Ambassador, both with four syllables and both starting with an A and ending with an R.

The ‘Make in India’ of 2015 was itself a copy. And typically—I know in politics there is nothing called an IPR—when Modi copied it five years ago, there was no reference at all to the original creators of the concept.

It was in 1905 that the Indian National Congress started the Swadeshi Movement. And the idea of ‘Make in India’ was born. And later, Mahatma Gandhi gave a call to the country to boycott English clothes. Off came the suits, shirts and trousers, socks and shoes of the freedom fighters, which were burnt in huge heaps across the country.

That was an event almost unheard of in human history. Wearing charka-spun Khadi became a new norm. In booting out the Englishman’s suit-boot Sarkar, Mahatma Gandhi effectively used the idea of Swadeshi. The Make in India Mark 1 was born.

And then after independence, Nehru came out with his Make in India Mark 2. Building huge dams and hydroelectric projects and setting up huge factories manufacturing heavy electrical equipment, electronics, consumables, consumer durables and cars—which, by the way, gave birth to the Ambassador, the Premier Padmini and so on—India embarked on its road to self-sufficiency. Swadeshi Mark 2 also produced Swadeshi technocrats, managers, scientists et al through IITs, IIMs and so on.

Whether it was steel or iron, hydro, thermal or nuclear power, clothes or cars, trains or buses, food or milk, technocrats or scientists, we began making in India all the things that we needed.

The Make in India of 2015 was but a changing of the grill of the Ambassador car, a Mark 3, if you will.

And in a mere 5 years, we now have Atmanirbhar, which is the murdered Mahatma’s Swadeshi initiative all over again, a Make in India Mark 4. A rose is a rose is a rose. It will smell the same by any other name.

Or as the French would have said, plus the change, plus ca le meme chose. The more you change, the more it is the same old thing.

The Ambassador car was driven out of the market before it could introduce a Mark 5. Let us see whether Modi will be a more thick-skinned survivor and a Mark 5 will come along shortly.

M.P. Joseph is a former IAS officer who has also served in the UN