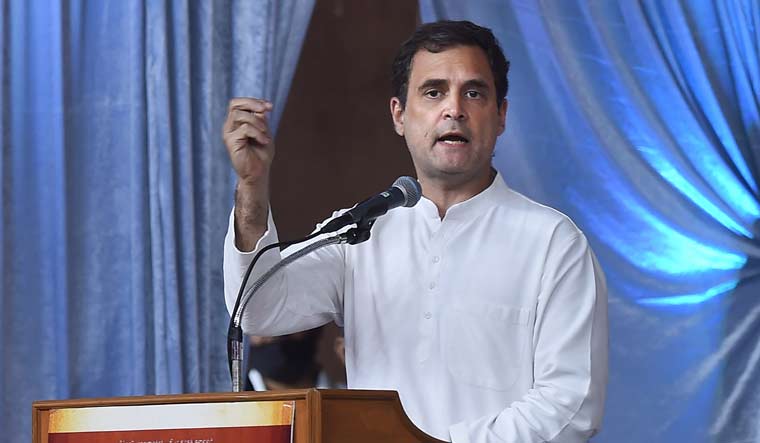 Former Congress president Rahul Gandhi on Wednesday alleged that unemployment, inflation, business closures are breaking the backbone of the country's economy and this critical situation is the handiwork of the "arrogant and incompetent" Narendra Modi government.

He also hit out at Prime Minister Modi over the exit of some global brands from India, and said Make-in-India cannot coexist with "Hate-in-India".

Gandhi highlighted the shortage of coal due to which many states are reeling under long power cuts in the country.

Gandhi and the Congress have been attacking the government over the issue of unemployment.

"India is in the midst of a severe power crisis. In most states, common people are being forced to bear 8-hour power cuts. I had warned the Modi government that lack of coal stocks will spell torment for the country as power demand peaks. Instead of addressing the issue, the govt issued a denial," Gandhi said in a Facebook post.

He said the truth speaks for itself and claimed that 106 of 165 coal plants have reached a critical stage with respect to coal stocks, with less than 25 percent stocks left.

We have only 21.55 million tonnes of coal in stock and the total required stock is 66.32 million tonnes, he said, noting that Gujarat, Uttar Pradesh, Andhra Pradesh, Maharashtra, Punjab and other states are struggling to meet surging power demand, he said.

"Unemployment, inflation, business closures are already breaking the backbone of our economy. This critical situation is the sole handiwork of an arrogant and incompetent Modi government," the former Congress chief said, using hashtags "#KiskeAccheDin" and "#BJPFailsIndia".