Infections over 1 lakh, five cities with half the cases: India's coronavirus story so far 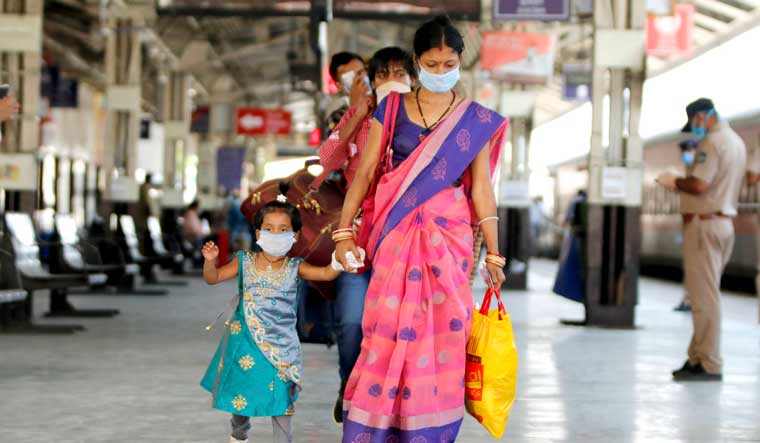 Migrants, stranded in different parts of Gujarat, arrive to board a special train to Odisha at a railway station in Ahmedabad | PTI

The number of coronavirus cases in India crossed 1 lakh on Tuesday, with the casualty count crossing 3,000. This comes on the back of a record number of cases on Monday, a jump of 5,242 cases in 24 hours. As of Monday, Maharashtra accounted for 33,053 of the cases, followed by Gujarat at 11,379, Tamil Nadu at 11,224, Delhi at 10,054 Rajasthan at 5,202, Madhya Pradesh at 4,977 and Uttar Pradesh at 4,259. Amid this inexplicable spurt, the ICMR revised its testing strategy. Now, returnees from abroad and migrants who show symptoms for influenza-like illness will be tested for COVID-19 within seven days of ailment. The ICMR stressed that no emergency clinical procedure, including deliveries, should be delayed for lack of testing.

The jump in cases comes amid a relaxation in lockdown; states have been busy planning an economic restart.

The ICMR also added that all hospitalised patients who develop symptoms for influenza-like illness (ILI) and frontline workers involved in containment and mitigation of COVID-19 having such signs will also be tested for coronavirus infection through RT-PCR test. Besides, asymptomatic direct and high-risk contacts of a confirmed case are to be tested once between day five and day 10 of coming in contact, the revised test strategy document stated.

At the same time, in a worrying development,The Indian Express reported on the possibility of asymptomatic populace in the national capital, claiming that, out of 835 samples taken from migrant workers who returned to Bihar from Delhi, as many as 218 were coronavirus positive. "This works out to a positivity rate of over 26 per cent, while the rate in the national capital is about 7 per cent. Until May 18, Bihar tested a total of 8,337 samples of migrant workers and about 8 per cent were found to be infection-positive, double the national average," according to the publication.

According to NITI Aayog data shared by CEO Amitabh Kant on Monday, India, even though it has a population of 1.3 billion, had just 2 COVID-19 deaths/million. The number was 511 in Spain.

The fatality rate of the coronavirus in India is similarly low. Mortality rate is three, as against 16 per cent in France.

"These rates are among the lowest in the world," Kant noted.

NITI Aayog data, as of Monday, showed that five cities—Mumbai, Delhi, Ahmedabad, Chennai and Pune—accounted for around 50 per cent of the coronavirus infections in the country.

With relaxation in lockdown measures, the health ministry issued guidelines on preventive steps to contain the spread of the virus in workplaces, outlining that the entire office building need not be closed if one or two cases of COVID-19 are reported there and work can resume after it is disinfected as per protocol.

However, if there is a larger outbreak, the entire building will have to be closed for 48 hours. All staff will work from home till the building is adequately disinfected and is declared fit for re-occupation, it said.

The basic preventive measures include maintaining physical distancing of at least one meter, mandatory use of face covers or masks, practising frequent hand-washing for at least 40-60 seconds even when hands are not visibly dirty and use of alcohol-based hand sanitisers.

Respiratory etiquettes such as covering mouth and nose while coughing or sneezing with a tissue, handkerchief or flexed elbow and disposing of used tissues properly should be strictly followed besides self-monitoring of health by all and reporting any illness at the earliest, the guidelines state.