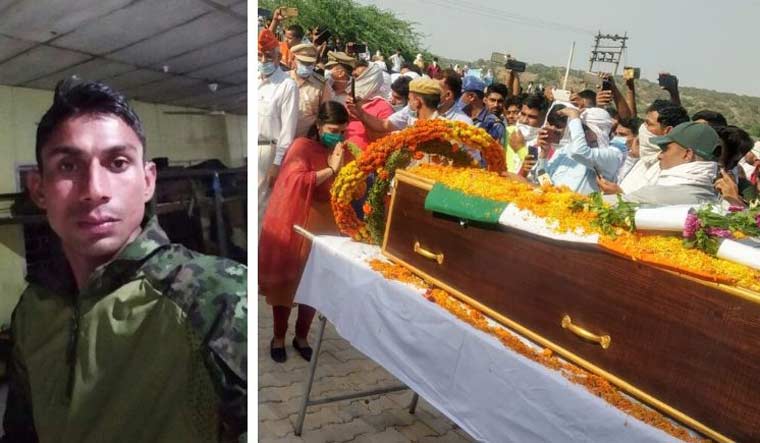 “He had told me that he would come back soon, but never said he would be wrapped in tricolour. My husband too was a soldier, and ever since Raj got posted in Kashmir I was always scared of getting a call about his death. He would often ask me to be mentally prepared for the same as Army wives and mothers have to. No matter how much you try, a mother can never be prepared to receive her young son in a casket. Wish I knew that call he made to me hours before dying was his last. I had so much to say. I just have one request, please take care of his children and wife. Don't disappoint them. That will be true homage for my son,” said an inconsolable Bimla Khatana, mother of Lance Naik Raj Singh Khatana, who was martyred in Kashmir on Sunday.

Khatana was killed during encounter with a top Hizbul Mujahideen commander from South Kashmir. According to army communication, “Based on information of presence of terrorists in village Tasnal of district Doda (J&K), a joint operation was launched by Indian Army and police in the suspected area. After cordoning off the area, the terrorists were asked to surrender. However, they resorted to indiscriminate firing. During the ensuing firefight, Lance Naik Raj Singh was critically injured and later succumbed to his injuries. Lance Naik Raj Singh was a brave, highly motivated and a sincere soldier. The nation will always remain indebted to him for his supreme sacrifice and devotion to duty.”

The martyred jawan's body was flown in from Udhampur to Delhi and transported to his native village Damdama in Sohna in Gurugram. The entire village paid floral tribute to him and the funeral was attended by the district administration officials and political leaders.

He is survived by a wife and three children.

“I am shattered. I have no plan on how to live the rest of life. We never had time to make future plans, but one thing we decided was that my two sons will join army. I am proud that my husband died leaving family with a proud legacy. I wish I could hold on to status of being Army wife rather than Army widow,” said his wife Ravita.