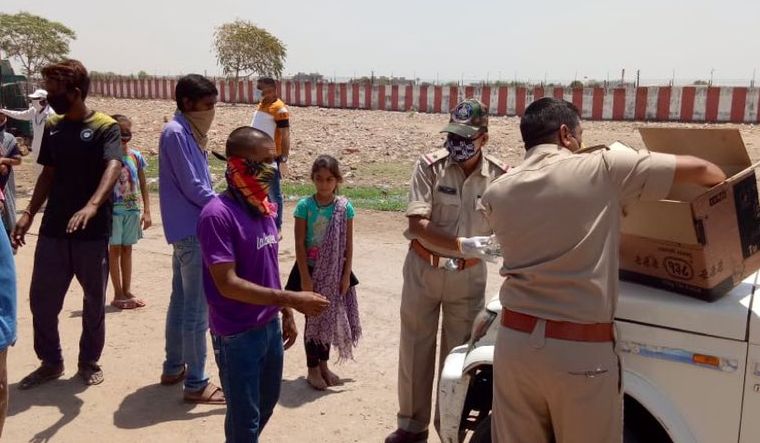 Ahmedabad has made wearing masks compulsory for vegetable vendors and shop keepers from May 1 as part of the exit strategy from coronavirus-induced lockdown. Failure to adhere to the rules would attract heavy penalty, said authorities on Wednesday.

In the last 24 hours that ended at 5 pm on Wednesday, Gujarat recorded 308 new cases, taking the total number of positive cases to 4,082. With 16 more people succumbing to the disease, the total death toll in the state has reached 197.

Those who have tested positive included 10 journalists, four from the state information department. Out of the six scribes who tested positive in Vadodara, three are from New Delhi. They were going around the country doing COVID-19 reporting.

Ahmedabad, which has the highest number of cases in the state, along with Surat and Vadodara, has contributed more than 90 per cent of the cases recorded in Gujarat. According to the government, the focus now is on 3 Ss--surveillance, slums and seniors.

Ahmedabad Municipal Commissioner Vijay Nehra has appealed to the youngsters to ensure that the seniors and those having comorbid conditions do not step out of their homes. For nearly a month now, AMC teams have been doing a pro-active survey and testing.

Nehra said that the AMC has started distributing 3.5 lakh masks and sanitizers to the vegetable vendors free of cost and now they have no reason to not wear the masks.

He exhorted people to change their habits and said that if the vendors do not wear masks, they will have to pay a fine up to Rs 2,000. Shop keepers will have to pay up to Rs 5,000 and super market owners Rs 50,000.

Not wearing a mask will also lead to suspension of licence for three months under Shops and Establishments Act.

In Gandhinagar, Principal Secretary Health and Family Welfare, Jayanti Ravi said: “We will have to live with COVID-19, fight with it and emerge victorious.”