Punjab seeks restraint and better coordination from the neighbouring state 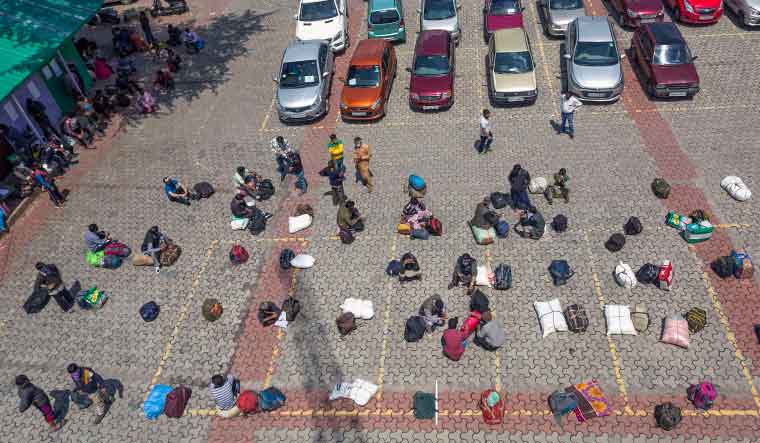 Stranded Kashmiri workers waiting with their luggage at SDM complex Palampur as they get permission to leave for Jammu and Kashmir during the nationwide lockdown, in wake of the coronavirus pandemic, in Kangra, Tuesday, April 28, 2020 | PTI

Himachal Pradesh has reportedly issued interstate transit passes to thousands of people in a move that has led to panic and chaos in the border districts of Punjab.

According to senior officials of Punjab, Himachal has issued an average of 2,000 passes daily to people either moving to Punjab or crossing the state while travelling to their native states.

“It is a situation of utter chaos and panic on the border. Suddenly thousands of people reached the border seeking entry into Punjab and we had no intimation about the same. With no prior information, the pre arrangements like deputing of enough police force to maintain state curfew norms, deploying health officials for their corona screening and arranging for quarantine facilities as and when required have emerged as a major challenge. For the last three days, we have long queues of people standing at the border amidst panic,” said Ropar DC Sonali Giri to THE WEEK.

Caught off guard, various border districts have decided to only quarantine those with evident influenza-like symptoms and let all others reach their respective destinations and be dealt by the health authorities concerned.

Rattled by the situation, Punjab government has sent a letter to Himachal state authorities requesting restrain and better coordination for effective management of the crisis.

As per the note, written by Punjab Special Chief Secretary K.B.S. Sidhu and exclusively procured by THE WEEK, Himachal has been asked to keep the districts concerned and the state headquarters in loop.

“This is to bring to your kind notice that various headquarters of Himachal like Kangra, Chamba and Kullu issued huge number of interstate passes in last two days. This was done without keeping the border/neighboring districts of Punjab or the state headquarters in loop, creating a near panic situation at border check points due to huge rush in the wake of COVID-19 pandemic,” read the letter.

Punjab also highlighted that not just the authorities but even the border districts like Una, Bilaspur and Solan were not expecting this huge number of people.

Himachal has thus been requested to coordinate for efficient management of lockdown on borders without putting human lives at risk.