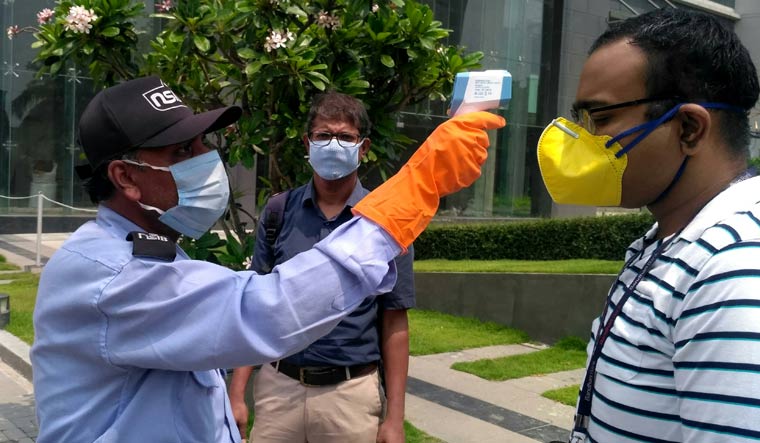 The trajectory of COVID-19 cases could have plateaued and might even fall for some weeks after the lockdown is lifted but India is likely to see a second wave in late July or August with a surge in the number of cases during the monsoon, say scientists.

The timing of the peak will depend on how India is able to control physical distancing and on the level of infection spreads after restrictions are relaxed, they said.

It looks apparent that the trajectory of daily new cases has reached a plateau and eventually it will take a downward fall, maybe for some weeks or even months, Samit Bhattacharya, associate professor at the Department of Mathematics, Shiv Nadar University, told PTI.

“Still, we may get a surge of new cases of the same coronavirus and this will be considered a second wave,” Bhattacharya explained.

“The second epidemic may come back in late July or August in the monsoon, although the peak timing will depend on how we control social distancing during that time,” he said.

“Once we return to normal activity levels, there is a chance that infection may begin to rise again. China is seeing this to some extent post easing of some restrictions on travel,” Sundaresan, corresponding author of a working paper by researchers at IISc and the Tata Institute of Fundamental Research (TIFR) in Mumbai, told PTI.

On March 25, when the number of coronavirus cases was 618 with 13 deaths, the government announced a nationwide lockdown that was later extended to May 3.

On Friday, the death toll due to COVID-19 rose to 718 and the number of cases to 23,077, according to the Union Health Ministry.

In good news, officials said this week that the doubling rate of cases has slowed down in the period, going from 3.4 days before lockdown to 7.5 days, with 18 states doing better than the national average. The recovery rate has also almost doubled in the last 10 days.

“Looking at the new cases in the past few days, it seems the growth of new daily infection is much slower than earlier. This apparently indicates that we might have reached at the plateau of the growth curve,” Bhattacharya said.

He noted that recent studies in China and Europe observed that the infection might relapse in those people who have already recovered from earlier phases.

So, there is no evidence that the earlier infection may help acquire immunity against the second infection. And in that way, the entire population may be vulnerable to the second wave to some extent, said the scientist.

In their study unveiled this week, IISc and TIFR researchers analysed the impact of strategies such as case isolation, home quarantine, social distancing and various post-lockdown restrictions on COVID-19 that might remain in force for some time.

The study modelled on Bengaluru and Mumbai suggests the infection is likely to have a second wave and the public health threat will remain, unless steps are taken to aggressively trace, localise, isolate the cases, and prevent influx of new infections.

The new levels and the peaking times for healthcare demand depend on the levels of infection spreads in each city at the time of relaxation of restrictions, they said.

“The lockdown is currently upon us. It has given us valuable time. Let us test, trace, quarantine, isolate, practice better hygiene, search for a vaccine, etc. We should do these anyway, and these are being done. When and how to lift the lockdown is going to be a difficult decision to make,” said Sundaresan.

“It's clear that it's going to be phased. What our team is focusing on is to come up with tools to help the decision makers assess the public health impact of various choices,” he said.

According to the experts, infectious diseases spread via contact between infectious and susceptible people. In the absence of any control measures, an outbreak will grow as long as the average number of people infected by each infectious person is more than one.

Once enough people are immune there will be fewer people susceptible to the infection and the outbreak will die.

However, when an outbreak is brought under control by social distancing and other interventions, it is possible only a small proportion of the population will have been infected and gained immunity, they said.

This means enough susceptible people may remain to fuel a second wave if controls are relaxed and infection is reintroduced.

Until the vaccine comes on the market, we have to remain alert. “Once sporadic cases occur here and there in the country, we immediately need to implement quarantine or social distancing locally for the people in that region, and also need to perform tests to identify positive cases irrespective of showing symptoms,” Bhattacharya explained.

“Note that these monsoon months are also flu season in many places of India. So, we should not ignore the early signs of the flu symptoms. Irrespective of symptoms, we need to increase tests in the hotspots to identify people and contain the surge,” he said.

Sundaresan added that the timeline for a second wave will depend on a lot of circumstances which may change as the time passes.

“Significant testing may have been underway, there may be behavioural changes with people becoming more careful about their hygiene, wearing masks may become more common, etc. All these responses may help restrict the second wave,” he said.

A study published in The Lancet journal earlier this month modelled the potential adverse consequences of premature relaxation of interventions, and found it might lead to a second wave of infections.

The finding is critical to governments globally, because it warns against premature relaxation of strict interventions, the researchers said.

While interventions to control the spread of SARS-CoV-2 are in place, countries will need to work toward returning to normalcy; thus, knowledge of the effect of each intervention is urgently required, they said in the study.

According to a recent analysis by the Harvard Chan School of Public Health, the best strategy to ease the critical care burden and loss of life from COVID-19 might be on-again, off-again social distancing.

In the absence of such interventions, surveillance and intermittent distancing may need to be maintained into 2022, which would present a substantial social and economic burden, the researchers wrote.