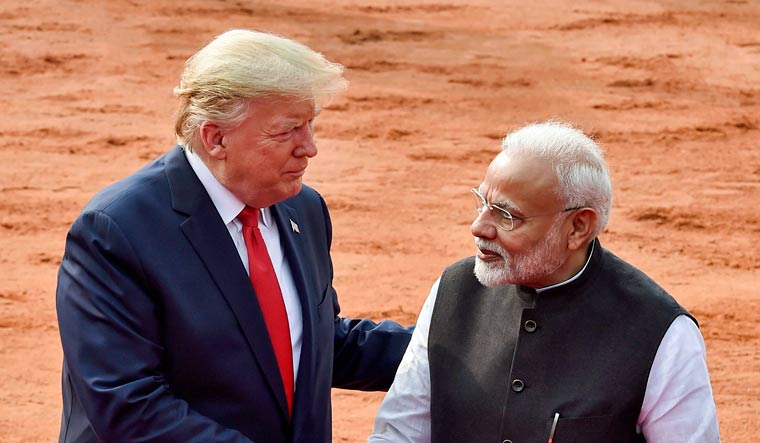 Though the formal decision from the OEM (original equipment manufacturer) is yet to be announced, defence sources maintained that the delivery schedule is certainly going to be affected for at least two-three months | PTI

Amidst the uncertainty over delivery of first of the four additional Boeing P-8I advanced maritime reconnaissance anti-submarine warfare aircraft, the United States government, on Monday, approved the sale of worth $155 million for Harpoon anti-ship missiles and MK 54 torpedoes for Indian navy's existing fleet of P8I aircraft. The Indian Navy has a fleet of eight P-8I aircraft for its maritime surveillance as part of the 312A Naval Air Squadron based in Arakkonam in Tamil Nadu since 2015.

In 2009, the Indian government signed a $2.1 billion contract with Boeing's Indian subsidiary for the purchase of eight P-8I aircraft. With this, the Indian Navy became the first international customer of an export variant of the maritime patrol aircraft. Subsequently, on the Navy's request, ministry of defence placed a $1.1 billion follow-on order for four additional P-8Is in 2016.

"First of the four P-8I (additional follow-in order) was scheduled to arrive in India by next month (May). But under the present circumstances of COVID-19 pandemic, delivery of aircraft is not certain. Delivery of all four P-8I was to be completed by end of 2021," said a senior official based in South Block in New Delhi. Though the formal decision from the OEM (original equipment manufacturer) is yet to be announced, defence sources maintained that the delivery schedule is certainly going to be affected for at least two-three months.

With a greater number of Chinese submarines making a foray into the Indian ocean, Rajnath Singh-led Defence Acquisition Council—the highest body of military acquisitions—has also okayed the procurement of six more Boeing P8I in November 2019, to widen the arc of operations of its Navy. But the contract of six more aircraft is still yet to be finalised.

On Monday, Washington approved a possible foreign military sale to the Indian government of sixteen (16) MK 54 All Up Round Lightweight Torpedoes, three MK 54 Exercise Torpedoes and other related equipment for an estimated cost of $63 million. The sale of 10 AGM-84L Harpoon Block II air-launched missiles is estimated to cost $92 million was also approved the US authority.

"This proposed sale will support the foreign policy and national security of the United States by helping to strengthen the US-Indian strategic relationship and to improve the security of a major defensive partner, which continues to be an important force for political stability, peace, and economic progress in the Indo-Pacific and South Asia region," Pentagon said in its statement.

It also added that the proposed sale will improve India's capability to meet current and future threats from enemy weapon systems. "The MK 54 Lightweight Torpedo will provide the capability to conduct anti-submarine warfare missions. India will use the enhanced capability as a deterrent to regional threats and to strengthen its homeland defence," Defense Security Cooperation Agency said in a statement while adding that India intends to utilise MK 54 Lightweight Torpedoes on its P-8I aircraft and will have no difficulty absorbing these systems into its armed forces.

Notably, India has a vast coastline of 7,500 km and accordingly a huge responsibility to maintain maritime security on not only its eastern and western seaboard but also deep down south in the Indian Ocean, these P-8Is are playing a very critical role.

In 2016, the Indian Navy broke the glass ceiling, when it inducted 22 women aviators as 'combat' for the crew of its most sophisticated anti-submarine warfare aircraft, the US-built Poseidon 8-India (P-8I). Though the primary task of the aircraft is to detect Chinese warships and submarines in the Indian Ocean, these women officers do have the button under their control to launch a missile or torpedoes in the event of a conflict (or if they find a hostile enemy warship). They operate and control all key sensors including weapons systems loaded in the aircraft. After analysing the data available on their systems, they fix targets for AGM-84L Harpoon Block II missiles capable of hitting a target out at sea more than 250 km away. Similarly, once detected, an enemy submarine can be taken out with a Mk 54 Lightweight torpedo loaded in the aircraft. Simultaneously, the aircraft is all data-linked with Indian submarines to have the capability to pass on information about enemy vessels.

In 2006, the Indian Navy had projected its requirement of at least 30 long-range maritime reconnaissance aircraft. but with budgetary constraint, the requirement has come down to 22 P-8Is.

The aircraft’s radars are capable of providing high-resolution images from 40,000 feet—the height at which commercial airlines fly—of undersea, over waters or land targets.

With a maximum speed of 907 km per hour and an operating range of over 1,200 nautical miles, "with four hours on station", the P-8Is will be able to detect "threats" — and neutralize them if required — far before they come anywhere near Indian shores.

“We have eight aircraft with very high availability. Every day some part of the Indian Ocean has to be visited. So it has shrunk the Indian ocean for us with its reach with sustenance. It is also an effort to showcase the national flag,” Captain Ravi Kumar, Commanding Officer of the Squadron INAS 312A told THE WEEK during a visit to the base INS Rajali a few months back, while adding that “Earlier we used to call us eyes and ears of the navy, now we are eye, ears and arms of the navy.”