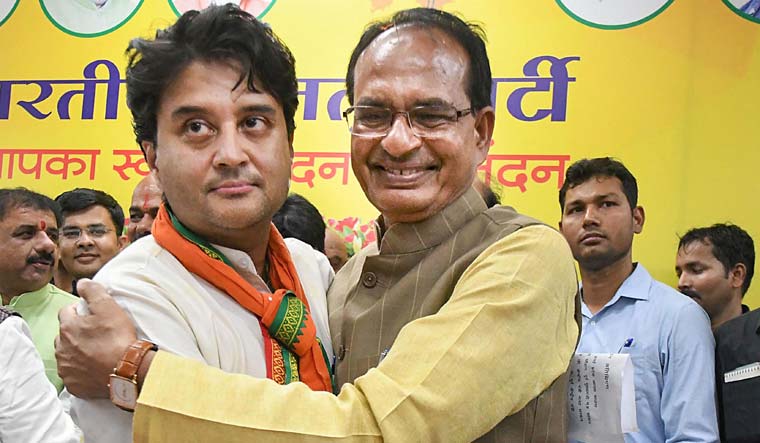 The Madhya Pradesh BJP unit on Monday evening constituted a COVID-19 task force of 11 senior state leaders, including Chief Minister Shivraj Singh Chouhan, indicating that the much-anticipated cabinet formation in the state might continue to be in abeyance.

State BJP president Vishnu Dutt Sharma is the convener of the task force and Jyotiraditya Scindia confidante Tulsiram Silawat, who was health minister in the Kamal Nath cabinet, is one of the members. None of the other Scindia camp leaders, who joined BJP just ahead of the March 24 lockdown, find a place in the task force.

The task force will review the COVID-19 situation from time to time, coordinate with the state government and ensure more activeness of the party organisation in regard to the disease, an official BJP release said.

Earlier on Monday evening, there had been strong speculations that the much awaited council of ministers in the state might finally come into being later this week. This speculation started floating after Chouhan, in a video communication to the media, said that cabinet formation had been consciously delayed due to the coronavirus situation and that further decisions would be taken in consultation with senior party leaders after Tuesday, when the first phase of lockdown gets over.

Chouhan’s statement came just a day after ex-chief minister Kamal Nath attacked the BJP for allowing the COVID-19 situation in Madhya Pradesh and the country to flare up for political gains. In an AICC media briefing, Kamal Nath also pointed out that in the current crisis situation, Madhya Pradesh did not have a home or a health minister.

Kamal Nath said that at such a crucial juncture, Chouhan is functioning without a cabinet. “The Constitution clearly says that there shall be a council of ministers. Vivek Tankha is absolutely right in pointing out the crisis in Madhya Pradesh to the president. Since March 23 (the day Chouhan took oath), when the situation with regard to COVID-19 is so serious, there is no cabinet. It is akin to making a joke of the people,” Kamal Nath said.

Madhya Pradesh is facing a COVID-19 crisis situation, with death toll at 50 and the positive cases surging to 648 by Monday evening. The cases and death toll have grown sharply over the past week.

However, sources said, the central leadership of the BJP does not seem to have cleared the cabinet formation in Madhya Pradesh at this juncture. The task force is reportedly an alternative to support Chouhan’s efforts to combat the coronavirus in the state. Sources also said that the tussle among state BJP leaders for cabinet berths, amid speculation that Scindia confidantes might get a good share of up to 10 ministerial berths, is another reason for keeping the cabinet formation in abeyance for the time being.

Meanwhile, Narendra Saluja, the media coordinator of MP Congress Committee chief Kamal Nath, took a jibe at the inclusion of Tulsiram Silawat in the COVID-19 task force. Saluja said that the inclusion in the task force of a person, who being the health minister was having fun at a five-star resort in Bengaluru when the COVID-19 crisis was unfolding, shows the extent of seriousness of BJP on the issue.