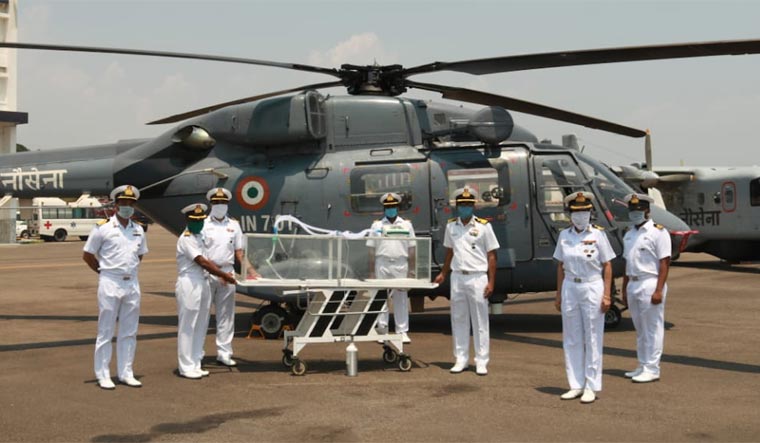 An air evacuation pod (AEP) was indigenously designed by Naval Aircraft Yard, Kochi, under the Southern Naval Command (SNC). The AEP will be used for safe air evacuation of COVID-19 patients from remote areas like islands, and ships in a fully sealed transfer capsule, eliminating the risk of infection for pilots and evacuation teams.

This will also do away with the need to sanitise an aircraft post-evacuation.

The evacuation pod, which was designed under the guidance of principal medical officer of the Naval air station in  Kochi, INS Garuda, in consultation with specialists from the Naval hospital INHS Sanjivani and HQSNC, is made of aluminium, nitrile rubber and perspex.

The highlight of the pod is that it weighs just 32 kg, and has a manufacturing cost of  Rs 50,000—about one per cent of the price of an imported equivalent item (Rs 59 lakhs), according to a press release.

Trials of patients inside AEP were undertaken on board the Advanced Light Helicopter (ALH) and Dornier aircraft of Indian Navy at SNC and were successfully completed on April 8. AEPs are planned for distribution across southern, western, eastern and Andaman and Nicobar Naval commands.

The successful induction of the AEP will increase the Indian Navy's abilities to fight to contain the pandemic, stated the press release.