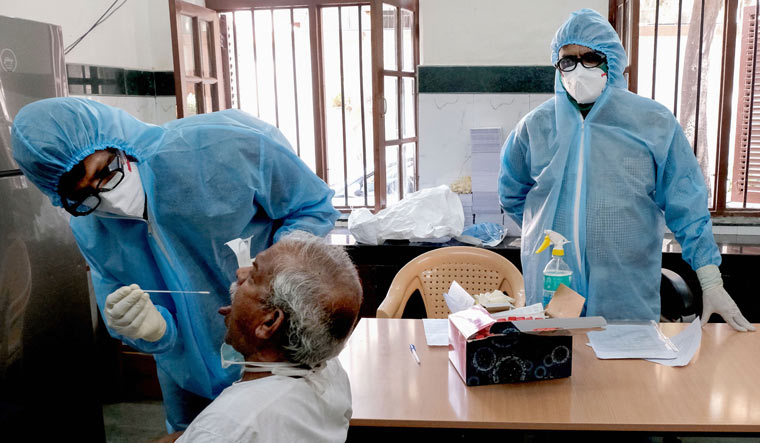 COVID-19 hotspot Indore is continuing to report deaths of patients with a chilling continuity. Two more deaths were confirmed on Sunday, taking the toll in the district to 32. During the past four days, 12 deaths have been reported from Indore, causing a big worry to the administration and apprehension among the common people.

Saturday saw a big surge in positive cases in Indore, with 49 more positive patients reported. The total number of positive cases here has now gone up to 298 and the tally in Madhya Pradesh has reached 546. Capital city Bhopal has reported the second highest positive cases at 131, maximum of them of or related to the state health department.

Indore chief medical and health officer (CMHO) Dr Praveen Jadiya confirmed to THE WEEK that reports of two patients, who had succumbed earlier, were found positive on Sunday, adding to the tally of the morbidities due to COVID-19. He also confirmed 49 more positive cases on Saturday.

Dean of MGM Medical College, Indore, Dr Jyoti Bindal has said that high number of positive patients is being reported from Indore because of high number of testing. She said that the number of sampling and testing were constantly on the rise in Indore and therefore more cases were detected.

Meanwhile, cases continue to be reported from new districts and now the number of districts with COVID-19 cases has risen to 22. Fortunately, however, the number of cases in most of the districts is restricted to few as of now, with only four districts of Ujjain, Morena, Khargone and Barwani reporting two-figure positive cases apart from Bhopal and Indore.

Ex-chief minister Kamal Nath has, however, called for intensive testing to detect cases in early stages. He has said that testing was negligible in rural areas and therefore the cases were not being detected in time. Earlier, he wrote to the Chief Minister Shivraj Singh Chouhan to increase the testing capacity in the state.