IMA writes to Amit Shah expressing concern over such incidents 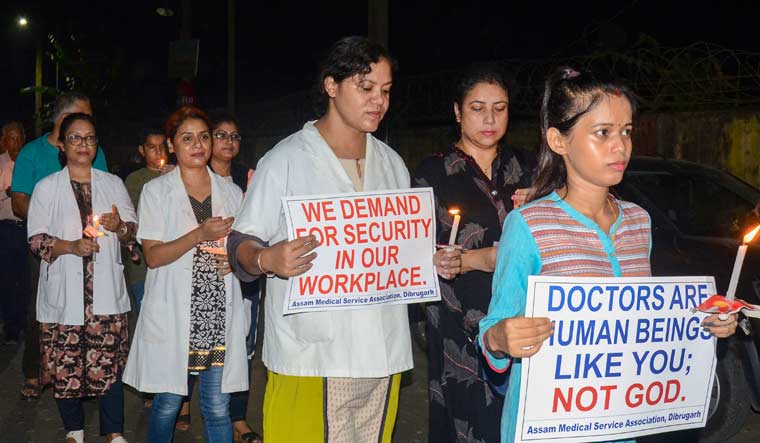 File photo: Assam Medical College & Hospital Teachers Association and the Assam wing of the IMA take out a candle protest rally against the alleged assault on Deben Dutta in Dibrugarh in 2019 | PTI

Amid rising incidents of attacks on healthcare workers during the COVID-19 pandemic, the Indian Medical Association on Friday demanded to bring a central legislation to strictly deal with such issues. The IMA wrote a letter to Union Home Minister Amit Shah, expressing concern over such incidents.

"The need to strengthen 23 state laws is becoming clear every day. IMA once again points out that a central legislation under item 1 and 2 of concurrent list i.e. IPC and CrPC are absolutely essential to deal with such situations. Kindly consider our plea,” the IMA said in its letter.

There has been a spate of attack and abuse on frontline health workers ever since India imposed the lockdown to contain the spread of the virus. These workers, mostly nurses and ASHAs, have been visiting villages to screen people and examine those in home quarantine and self-0isolation.

Talking to news agency IANS, IMA president Dr Ranjan Sharma said such incidents are increasing and there is lack of good deterrence in law for dealing with such incidents. He pointed out an incident near Safdarjung Hospital, New Delhi where two young lady doctors were accosted and abused physically and verbally by an assailant, and asked, “how long such abuses be tolerated especially amidst a pandemic?”

"Morale of the medical and allied healthcare workers is vital to fight the current epidemic. Such demoralising incidents have to stop. We once again demand an ordinance against violence on doctors, nurses, health care workers and hospitals," he told the news agency.

Last week, residents of a locality in Indore pelted stones at healthcare workers who had gone there to screen people, leaving two female doctors injured.

In another incident, locals in Munger town in Bihar attacked police and medical personnel when they visited the area to collect samples from people suspected of having coronavirus infection.

In Hyderabad, a duty doctor and the staff were attacked after a 49-year-old COVID-19 patient died. In Maharashtra’s Solapur, a 56-year-old man was attacked after he informed the authorities about the arrival of those who attended the Tablighi Jamaat event in Delhi.

In Bengaluru, an ASHA worker was attacked in Hegdenagar where she had gone to create awareness about the pandemic. Clashes were reported from West Bengal between police and locals after the former tried to collect COVID-19 data.

On Wednesday, a group of women health workers and a woman constable were allegedly sexually harassed and manhandled by a group of men in Panchkula, Haryana.