Number of cases in TN has risen to 67, the highest spike since lockdown began 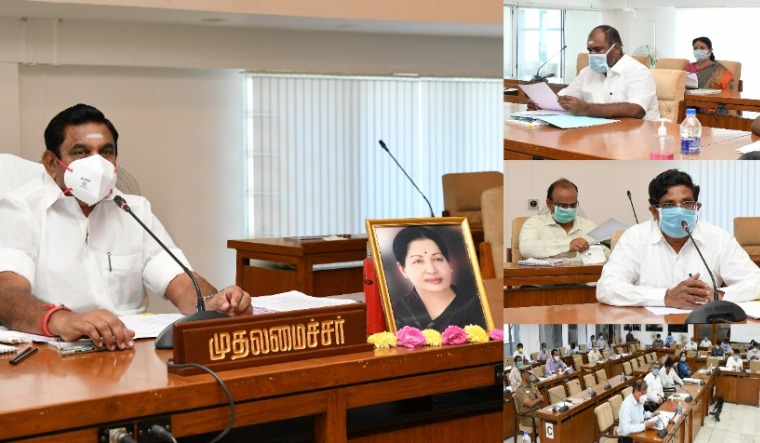 A collage shared by the Chief Minister's Office of a meeting chaired by CM Edappadi K. Palaniswami | Official Twitter handle

The Tamil Nadu health department has recorded 17 new cases of novel coronavirus (COVID-19) on Monday, making the total number of cases to go up to 67. This is the single largest number of cases recorded on a single day since the lockdown began in Tamil Nadu.

After a review meeting with authorities and health department officials, Tamil Nadu Chief Minister Edappadi K. Palaniswami gave details at a press conference. “More than 1,000 people had attended a conference conducted by Tablighi Jamath at Nizamuddin in New Delhi. This has led to the increase in the number of cases in Tamil Nadu,” Palaniswami said.

Stating that four new cases have been recorded in Chennai, one each in Madurai and Thiruvarur, he said, “Social distancing can be the only solution for this. This is a concern for health and life. Media should help us spread the message and create awareness. As of now, there is no medicine for this. Even developed countries do not know what medicine to give for this. Social distancing is the only solution for this.”

All the 17 patients have been admitted to hospitals in Chennai, Erode, Madurai and Karur. Meanwhile, the state government has been actively carrying out containment plans in 10 districts and in nine zones in Chennai. The authorities, with the help of sanitisation workers, are out to identify 2,500 houses in an 8km radius in the areas where patients tested positive.