Returning labourers in Bengal village made to self-quarantine in trees! 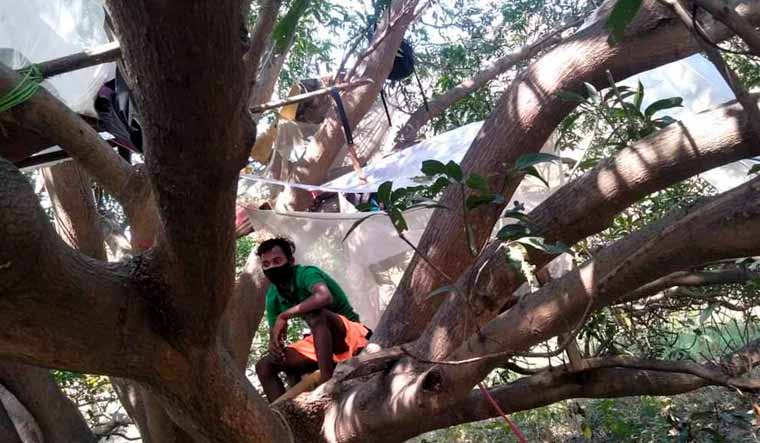 Purulia: A migrant arrived from Chennai, perches on a banyan tree to remain in quarantine in the absence of separate room for self-isolation in their small huts during a lockdown in the wake of coronavirus | PTI

Go climb a tree! So goes the idiom. The families and villagers of seven migrant labourers returning home to Balarampur village in West Bengal's Purulia district told them just that, literally.

Taking the coronavirus outbreak and the media campaign about social distancing seriously, the villagers asked these men to make trees their home during the self-quarantine.

According to local MLA, Shantiram Mahato, the labourers had returned last Friday and were advised self- quarantine for 14 days as a precaution against COVID-19.

"As they did not have enough space in their homes to maintain social distancing, it was decided they will live on trees for the time being," he said.

Cots were arranged which they tied to the branches and plastic sheets were placed over them to protect them from rain.

A separate space was marked for them outside the village where they could relieve themselves, bathe and wash clothes, a member of the local panchayat said.

They would climb down the trees thrice daily to have meals, and for answering natures call. Blankets and clothes were provided by us, Bijoy Singh Laha, whose brother was among them, said.

He said after the seven returned from Chennai, doctors advised them to stay under home-quarantine for 14 days and follow social distancing.

Since their houses had few rooms, the villagers hit upon the idea that they take shelter on trees.

However, as social media got abuzz with their photos and videos, the local administration stepped in and shifted them to a quarantine facility on Saturday.