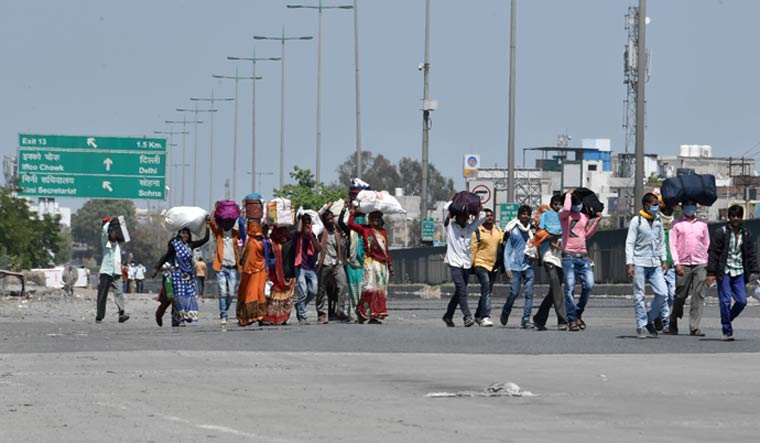 In a bid to stop the wave of mass migrations that have defeated the purpose of social distancing and put healthcare systems at risk, the government has reworked its lockdown strategy.

On Sunday morning, the National Executive Committee, led by union home secretary A.K. Bhalla, decided to stop all such movements and issued strict orders asking states and union territories to immediately restrict the movement of migrant workers to their domicile state and implement the lockdown measures.

The move came after the Uttar Pradesh state transport department readied 200 buses to depart every two hours from Saturday morning to take migrant labourers from Ghaziabad, Noida and bordering areas in the National Capital to their destinations in Uttar Pradesh. The ensuing rush and chaos that set in flummoxed the Centre, even as state government officials tried to ask the migrants to stay in Delhi.

The directions from the central government will now override any state government directions and the migrant labourers will be sent to nearest shelter facilities instead of their hometowns.

The home ministry had on Saturday asked states to set up temporary shelters for the migrants travelling or walking to their homes. The move seemed to have been an immediate reaction to the emerging situation and also to concerns being flagged by the Opposition parties who demanded assistance from the central government to help migrant labourers reach their home towns.

By Sunday, the government realised the need for clear directions to stop the mass movements that had begun.

Noting that facilitating their travel to home towns could carry the infection and spread it in their respective destinations will pose a major health risk, the new order by the home ministry is asking district magistrates and superintendent of police and all local and state authorities to stop the stranded migrant workers wherever they are and ensure they are provided food and shelter as also quarantine facilities for 14 days.

A senior government official said that this is part of the containment strategy for COVID-19 as the infections, if any, will remain limited in that area and healthcare can be provided to them without spreading the infections further.

A string of measures are being taken to ensure the wages of migrants are not stopped and the rented accommodations where they had been living are still available to them when they return.

The government order says that “all the employees, be it in the industry or in the shops and commercial establishments, shall make payment of wages of their workers, at their workplaces, on the due date, without any deduction, for the period their establishments are under closure during the lockdown.”

The government has also said that wherever the workers, including the migrants, are living in rented accommodation, the landlords of these properties shall not demand payment of rent for a period of one month. If any landlords try to force labourers and students to vacate their premises, they will be liable to face action.

The home ministry has decided to strictly enforce these measures and implement the lockdown strategy for all sections of people, including the migrants. It has said that the DMs, SP, DCPs shall be personally liable for implementation of the directions and lockdown measures. These directions have been circulated to all central ministries and all states and UTs for a coordinated response to stop the mass movements of migrant workers.

The government order will override the UP State Road Transport Corporation order issued Saturday where it had said that it is deploying buses to provide transport facilities to people stuck at various points at border district of Delhi on the directions of the Government of Uttar Pradesh.

“The Buses have started reaching Noida and Ghaziabad. Few Buses which have already left Gaziabad Noida and bordering areas are on the way to various Destination in UP. UPSRTC would requests all DMs/SSPs/SPs to inform all their border check points, not to stop these buses enroute, the UPSRTC order had said.

The state road transport department had also requested the "Destination Points District DMs" to take note of the bus details reaching their District Points on March 28 and March 29 and to make arrangements for the ‘Medical Screening’ of all passengers alighting at the termination points and also note passenger details like their names, addresses, mobile numbers and the like, for further monitoring and supervision.