Probably, for the first time, Sonagachi is seeing such a huge slide in business 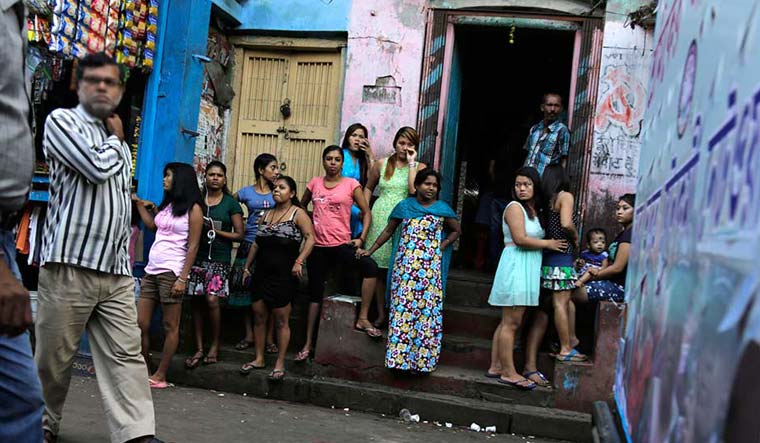 Sex workers and their children from Sonagachi in Kolkata | Salil Bera

Ten kilometres from the Esplanade - the heart of Kolkata—stands three rows of dingy lanes having columns of buildings on the both sides. It is the oldest and largest red-light area in Asia—Sonagachi.

With COVID-19 pandemic gripping India, the city has not been spared either. A 58-year-old man breathed his last at a city hospital after he contracted the virus from a person who had returned from London. There are six more cases in Kolkata and are currently under treatment.

The pandemic has shaken the nation. Sonagachi, and its 8,000 women, too are feeling the pinch.

The place used to see a footfall of around 15,000-20,000 every evening. As night fell, the place would come to life. These iconic brothels of Kolkata have been immortalised in several films, one of which was Amar Prem, starring Rajesh Khanna and Sharmila Tagore.

The clients would come from the city, rural Bengal and even from northeast. The brothels there have women from all over India, including neighbouring countries like Bangladesh, Nepal and Bhutan.

Though flesh trade is banned in India, it continues to thrive in cities.

Many call these sex-workers, seen waiting on the busy Chittaranjan Avenue daily to catch the attention of prospective clients, a curse on the 'City of Joy'. However, others say Sonagachi maintains the 'balance' of the society in the city.

The 'balance' is in danger of being upset, as, apparently for the first time in its history, Sonagachi is seeing a huge slide in business.

According to Durbar Mahila Samity, an organisation floated by a doctor, with sex workers as members, more than 50 per cent have come to Sonagachi to escape from poverty. Many of them have returned to their homes, and others, too, want to leave because of the coronavirus pandemic.

“What could we do? They need food and money to survive. This is for the first time I am seeing such a drastic cut in business. In fact, many have gone back to their distant relatives,” Dr Smarajit Jana, founder of Durbar, told THE WEEK.

Jana said the women and around 2,000 children are suffering from acute shortage of food and money. Many children go to school and live outside Sonagachi to evade the flesh trade.

Coronavirus seems to have created more problems than HIV and AIDS. In the eighties, Durbar had a tough time convincing women to allow clients to use condoms.

“Today, things are much complex. Few days back, we asked women to disallow clients with high fever. However, to our surprise, the clients themselves decided to turn their back on Sonagachi,” Jana said.

The result was a deep slump in business. On Sunday, hours before the lockdown, the busy Rabindra Sarani looked deserted. There were no women standing on the roads on either sides—be it Chittaranjan Avenue or Rabindra Sarani. On a normal day, the place will be teeming with touts and the women.

Jana said his organisation has funds, which is used for the treatment of the women and emergencies, but they are not enough to feed the thousands in Sonagachi. With the slump in business, many women are unable to send money to their homes.

The state government has so far refused to make any comment.

A senior official, who preferred anonymity, said, “Food can be made available. But we will have to see the rules. Something needs to be done.”