This is a false case. I was distributing vegetables, the MLA said 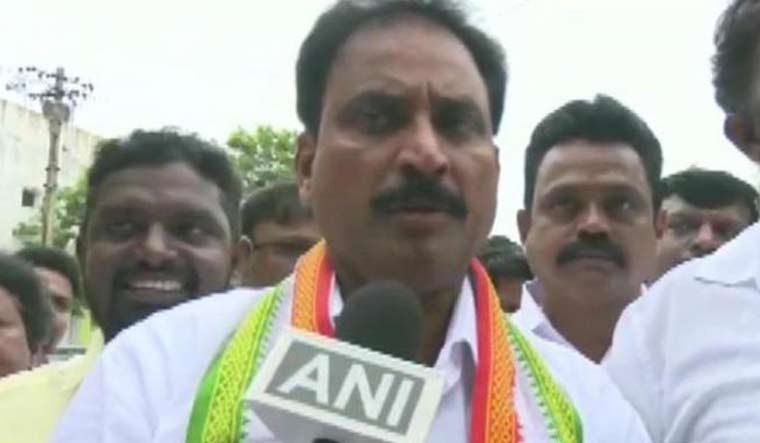 Puducherry MLA Johnkumar of the ruling Congress party has been booked under various sections of the Indian Penal Code (IPC), Disaster Management Act and Epidemic Diseases Act for violating the curfew orders of the government to curb the spread of COVID-19. FIR has been filed against Johnkumar and his aide Velou alias Veloumama.

According to a tweet put out by Puducherry Lt Governor Kiran Bedi, the FIR has been registered and forwarded to Judicial Magistrate II. As per the image tweeted by Bedi, based on information, the cops went to the residence of the MLA at Nellithope area where “he was personally distributing bags containing vegetables to the people who had gathered outside his house. He was assisted by Velou alias Veloumama. There were more than 200 people and on seeing the police they dispersed from the spot.”

A case has been registered against Johnkumar and Velou uder sections 269, 188 of the IPC and 51(b) of the Disaster Management Act 2005 read with section 3 of the Epidemic Act 1987.

“This is a false case. I was distributing vegetables. It was only for the needy. People were clearly following social distancing. Legislators like me and the government servants can only help the needy. I shall face the case in the court,” the MLA told THE WEEK. He said the governor has always been targeting the ruling party in the union territory and this was also one such instance. “The visuals were purposely shot and forwarded though WhatsApp to the police. If the governor herself sends WhatsApp messages what will the police do?” asked Johnkumar.

Governor Kiran Bedi said the legislator, who has to be a responsible citizen, violated the curfew orders. “Am glad the honourable MLA admits that there was a gathering. He well knows at the time of lockdown any gathering is a violation. This is not the time to violate but to comply with laws and send the right message to the people at large. There are ways to help. He could have contributed for relief funds. However, whatever his defence is he will now defend himself before the honourable courts now under Disasater Management and Epidemics Prevention which has stiff penalites,” Kiran Bedi told THE WEEK.

However, the FIR and the action against Johnkumar has come out as a shock to the residents of Puducherry.