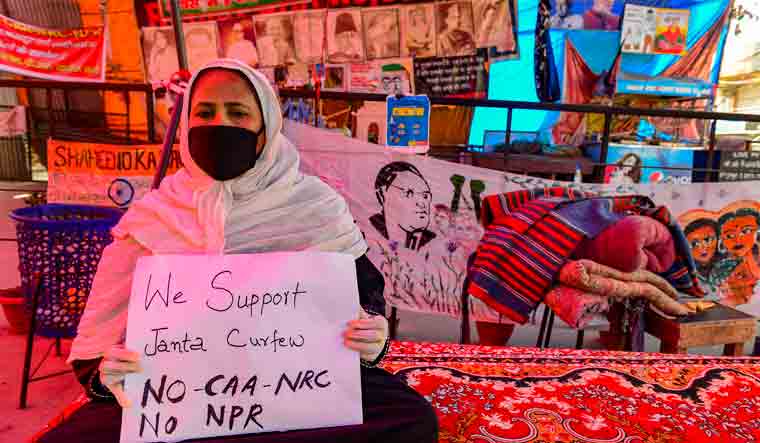 A woman holds a placard during a sit-in protest against CAA, NRC and NPR | PTI

As Delhi observes a statewide lockdown till March 31 in its battle against novel coronavirus, many have wondered about the future of Shaheen Bagh protests which is the longest continuing one against CAA-NRC-NPR. But as they say, life goes on even in perilous times. And so does dissent. Considering how the iconic site has redefined methods of peaceful protests, including artworks, book readings, lectures, poetry recitals and communal cooking, it is no surprise that this unprecedented uprising, led largely by students and grandmothers, has adapted quickly to ensure safety and defiance go hand-in-hand.

Even though the protesters have gone home for now, the people behind the makeshift library at the protest site—Fatima Sheikh Savitribai Phule Library—will host a Facebook live session on Monday at 8pm to mark the martyrdom day of Bhagat Singh, Sukhdev, Rajguru and Paash with a cultural evening. Singh, Rajguru and Sukhdev were hanged in the Lahore jail on March 23, 1931 at 7:30pm. A singer will live-stream revolutionary songs in their honour.

Mohammed Asif , now studying Persian in a distance course, had stared the library at the site on 17 January and it now stocks over 1,000 titles across categories in the social sciences and literature. But the books have now been packed in cartons and kept aside. "No one is scared here. Of course, now there is a halt in the sit-in protests because of circumstances. But how can it stop until the CAA is revoked," asks Asif who doesn't think the future of the spirit of resistance at Shaheen Bagh is in jeopardy. "People will continue to mark their protest from homes and balconies, students can write articles, keep sharing their views on social media. It can take any form. There is no absolute, conclusive way to protest," says Asif whose dissent continues with his act of reading more copiously. Currently he is reading 'Love in the Time of Cholera'.

Anisur Rahman, general secretary of Akhil Bharatiya Dalit-Muslim Adhikar Manch, rubbishes reports of an anti-CAA protestor at Shaheen Bagh testing positive for COVID-19. "This is all fake news. We haven't heard of anything like that here, " says Rahman, adding that until March 21, before the Junta Curfew and the state lockdown kicked in, the protesters have been taking precautions for a week following the Delhi government guidelines. "Outsiders came in and hurled petrol bombs to create a ruckus at Shaheen Bagh a day go when there were hardly any people," says Rahman. "For one week, there was large-scale distribution of sanitizers and face masks. People didn't shake hands. The "dabang daddis' did not sit on the ground. There were chowkis (wooden benches) placed at a distance of 2m from each other. And only two people could sit on the benches. Since the day of the curfew, the protesters have left their slippers behind on the chowki to symbolically mark their silent protest," says Rahman, not without a sense of pride.

Rahman would also want Shaheen Bagh-like protests in other cities like Lucknow and Kolkata to act sensibly. "Shaheen Bagh works with a sense of responsibility. We have started the protest here and it is our responsibility to show the way to evolve according to the circumstances," Rahman says.