PM Modi had on Thursday called for the voluntary 'Janta curfew' 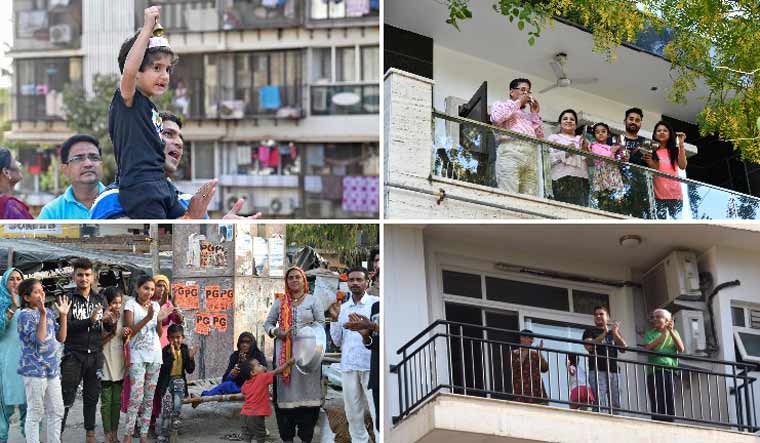 Millions of people across the country stayed indoors on Sunday in an unprecedented and overwhelming response to Prime Minister Narendra Modi's appeal for a 'Janta Curfew' to help check the spread of coronavirus, coming out briefly at 5 pm to show gratitude to health and other essential service providers with sounds of bells, conches and claps.

The prime minister thanked the people but said it was the start of a long battle, as he urged them to follow social distancing to stop the chain of transmission of coronavirus which has infected 360 people and claimed seven lives in India.

Be it Mumbai, known as the city that never sleeps, Patna or Ahmedabad, life came to a standstill in the country as roads, railway stations and airports wore a deserted look and markets and establishments except those dealing in essential goods and services remained shut during the 14-hour self-imposed curfew that started at 7am.

In the national capital, roads which are usually chock-a-block had only a few private vehicles and buses plying. The Delhi Police gave flowers to people who stepped out of their homes, requesting them to stay indoors. In some parts, policemen also handed out masks and sanitisers to spread awareness about coronavirus.

As the clock struck 5, the air reverberated with a medley of sounds from bells, conch and beating of metal plates, with people coming out in balconies, lawns and terrace of their homes to express appreciation for medical and other staff who are on the frontline of the battle against the coronavirus.

From children to the elderly, common people to VIPs, residents of metropolitan cities to villages, all responded to Prime Minister Modi's appeal to show gratitude to doctors, paramedics, police, sanitary workers, mediapersons and other personnel associated with essential services.

Many took positions with their choice of instruments, including metal plates or whatever kitchen utensils they could get, while some played the sounds of conches and bells on their phones and music systems. Police sirens too were heard.

People also shared videos on social media on the response of residents in their areas. Modi tagged a video which showed his mother Heeraben beating a plate in Gujarat.

Taking to Twitter, Modi said it is an expression of gratitude by the people and also the sound of the bugle declaring the long battle ahead.

"With this resolve and patience, let's restrict (social distancing) ourselves," Modi tweeted in Hindi with the hashtag 'Jantacurfew'.

"Today's Janta Curfew may end at 9.00 pm, but this does not mean we start celebrating... it is the beginning of a long battle. Today countrymen have told that we are capable, and once we decide we can take on any challenge together," he said in a series of tweets.

He urged the people living in areas which are under lockdown not to venture out of their houses.

By evening, authorities announced a slew of extraordinary restrictions including suspension of all interstate-buses, passenger trains and metro services in the country, while 80 districts in 17 states and five Union Territories including Delhi where coronavirus cases have been reported were locked down till March 31.

Commercial capital Mumbai, which is not new to natural and man-made disasters, observed a shutdown on Sunday unlike any. The iconic Gateway of India, Juhu beach and the Bandra-Worli sealink, which are otherwise always bustling with activity, wore a desolate look.

The Chhatrapati Shivaji Maharaj Terminus and other suburban train stations presented an uncommon sight of being empty as people stayed indoors to support the curfew.

Key market places in Fort, Dadar, Andheri, Borivali, Ghatkopar, Bandra-Kurla Complex and other areas were also empty as the city intensified its fight against the deadly virus by staying away from public places.

The Goa Church and others cancelled Sunday masses. Prominent temples were also shut while community prayers were suspended by almost all major shrines of various faiths.

Most of the gated-colonies and apartments in cities were locked from inside, while civic bodies took up the job of sanitising public places such as parks and bus stands.

In Kolkata, the usually crowded Esplanade, and Dalhousie areas, besides airport and railway stations were nearly empty. 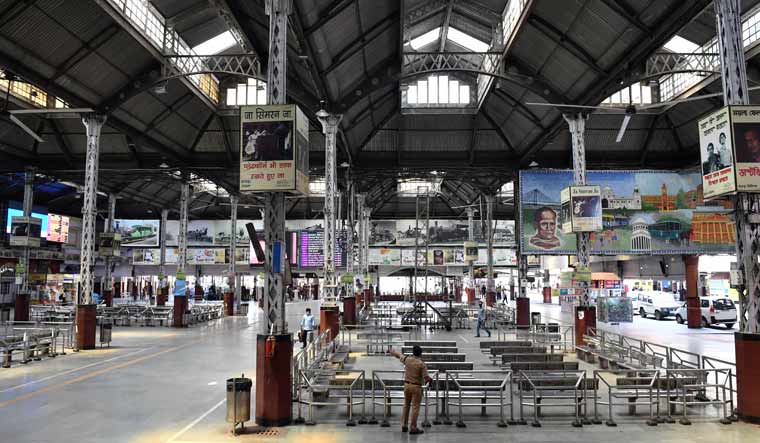 In Tamil Nadu, arterial roads, including the Anna Salai and the GST Road in Chennai and vital junctions like the Kathipara grade separator which are usually teeming with vehicles and people were empty. The iconic Marina and Elliots beach were also deserted.

Cutting across party lines, chief ministers and others leaders had urged the people to follow the self-imposed curfew and thanked them for their cooperation.

No passenger train from any railway station in the country originated beginning Saturday night and metro services, including in Delhi, Hyderabad and Mumbai, were suspended for the curfew.

Air carriers like GoAir, IndiGo and Vistara had curtailed domestic operations and traders' body Confederation of All India Traders (CAIT) had announced that they will keep their establishments shut across the country on Sunday.

Modi had on Thursday called for the voluntary 'Janta curfew', saying no citizen, barring those in essential services, should get out of their houses, and asserted that it will be a litmus test to show India's readiness to take on the coronavirus challenge.

He had lauded the hard work of medical professionals, sanitation staff, airline crews, delivery persons and media personnel among others and asked people to express gratitude to them by giving them a five-minute standing ovation at 5 pm on Sunday by clapping hands, beating plates or ringing bells.

Ahead of the start of the curfew, he said this morning, "In a few minutes from now, the #JantaCurfew commences. Let us all be a part of this curfew, which will add tremendous strength to the fight against COVID-19 menace".

He said the steps to be taken now will help in the times to come.

"Stay indoors and stay healthy," he said on Twitter.