Justice has been served, says Nirbhaya's mom; celebrations outside Tihar 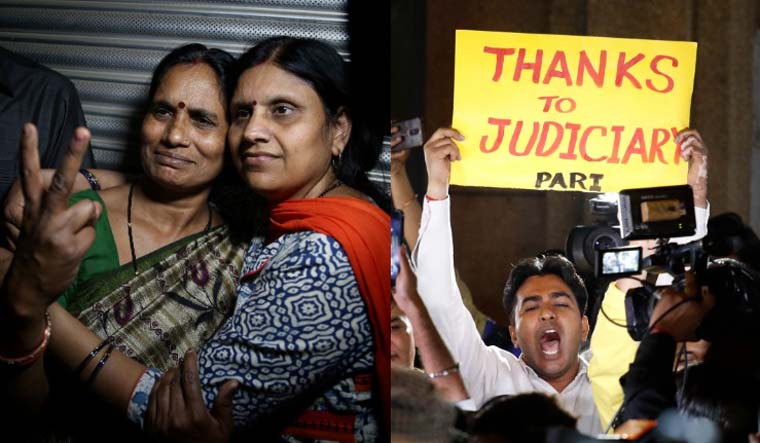 Justice has finally been done and women will definitely feel safer now, Nirbhaya's mother Asha Devi said after four men convicted of gang-raping and murdering her daughter were hanged at Tihar Jail on Friday.

Talking to reporters at her house, Asha Devi said that justice was delayed, but not denied, and added that they would continue their fight for justice for India's daughters.

"We will request the Supreme Court to issue guidelines, so that no one can adopt delaying tactics in such cases in future," she said. She said that women will definitely feel safer after this execution.

Nirbhaya's father said, "Our wait for justice was painful and agonising. We appeal for observing this day as Nirbhaya Nyay Diwas (day of justice)”.

Hundreds of people, carrying the national flag and shouting slogans of 'long live Nirbhaya' and Bharat Mata ki Jai, gathered outside the Tihar Jail since the early hours of Friday, with some of them distributing sweets, after the four convicts in the Nirbhaya gang-rape and murder case were executed.

Security was beefed up outside the Tihar Jail Number 3 where the four convicts—Mukesh Singh (32), Pawan Gupta (25), Vinay Sharma (26) and Akshay Kumar Singh (31)—were hanged at 5.30am.

Among the people who gathered outside the jail was social activist Yogita Bhayana. She held a poster which read 'Nirbhaya has got justice. The other daughters still await'.

"Justice has been delivered finally," she said, adding it was a victory of the legal system.

Some people distributed sweets after the convicts were hanged. They raised slogans and waved the national flag.

The horrific gang-rape and murder of the 23-year-old physiotherapy intern on December 16, 2012, who came to be known the world over as Nirbhaya (the fearless one), had seared the nation's soul and triggered countrywide outrage.

Akash Deep, who has been associated with the victim's family, said he was there to witness the victory of a long-fought legal battle that continued for over seven years.

"It was a tough fight. However, justice was won today," he said.

Divya Dhawan, who came from Subhash Nagar, said, "The decision is good but that could have been better if justice was delivered earlier on time."

Sana, a resident of west Delhi, said, "Nothing will change after this hanging in our society, but we are happy that the four convicts have been hanged and the justice was delivered to Nirbhaya."

This is the first time that four men have been hanged together in Tihar Jail, South Asia's largest prison complex that houses more than 16,000 inmates.

The executions were carried out after the men exhausted every possible legal avenue to escape the gallows. Their desperate attempts only postponed the inevitable by less than two months after the first date of execution was set for January 22.

In last-gasp attempts, one of the convicts knocked on the doors of the Delhi High Court and the Supreme Court just hours before the hanging.

In an unprecedented late-night hearing that began at 2.30am and lasted an hour, a Supreme Court bench dismissed his last plea.