Vehicles carrying essential commodities will be allowed after all medical precautions 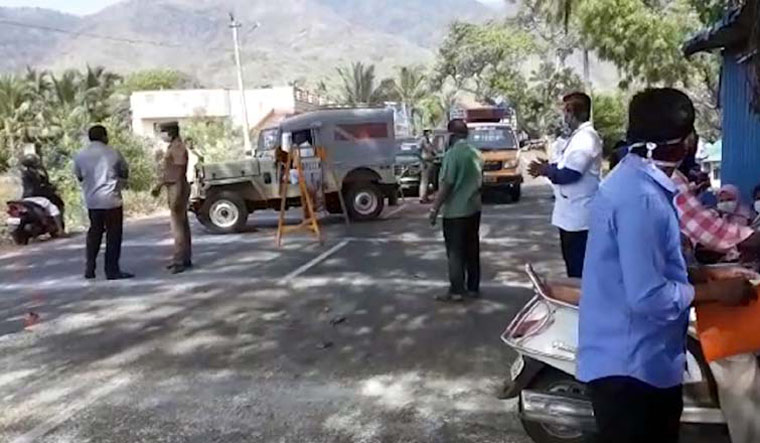 In a stringent effort to control the spread of the novel coronavirus, the Tamil Nadu government on Friday closed its inter-state borders with Kerala, Karnataka and Andhra Pradesh for vehicle traffic till March 31.

Vehicles carrying essential commodities like milk, petrol, diesel, vegetables, medicines, ambulance, gas cylinder and other goods will alone be allowed. However, people travelling in these vehicles will be subject to medical precautions.

In a press statement issued on Friday evening, the state government said: "All vehicular traffic in the borders of Kerala, Karnataka and Andhra Pradesh will be stopped till March 31, except for essential goods like milk, petrol, diesel, vegetables, medicines, ambulance, gas cylinder and other goods."

A team of Tamil Nadu police and healthcare personnel have been deployed in the inter-state borders near Walayar check post on the outskirts of Coimbatore and also at Puliyarai in Thirunelveli. The government has reportedly instructed collectors of districts sharing border with Kerala, Karnataka and Andhra Pradesh to strictly monitor and check vehicles from the neighbouring states.

Chief Minister Edappadi K. Palaniswami has had a few rounds of review meetings with his cabinet colleagues and authorities and had given strict orders to seal the inter state borders, according to sources. The malls, cinema halls and temples in the state have been closed down since Monday.

Meanwhile, a number of vehicles from Kerala are being stranded in the borders to Tamil Nadu. Long queues were seen at all border checkposts including Kaliyikkavila, Walayar and Puliyarai. Kerala RTC buses are also being stopped at these check posts.

It is understood that only vehicles with TN registrations are being allowed to cross the border, that too, after proper medical check ups.

Talking to the WEEK, an official with the KSRTC said that it is stopping all the services to both Tamil Nadu and Karnataka. “We have requested the TN government to allow the KSRTC buses which are already in TN to come back,'' he said. According to him, it is always advisable to restrict travelling in the current situation.

With more Covid cases being reported from Kerala's Kasargode, the district collector has issued orders to close the borders with Karanataka.

The Karnataka government said it has neither sealed the border nor restricted interstate vehicular movement. However, the government has set up passenger screening facilities at all the checkposts.

In February, when Kerala reported three cases of Covid-19, the Karnataka government had placed border districts of Dakshina Kannada, Kodagu, Chamarajnagar and Mysuru under surveillance.

Two health teams were deployed at Moolehole and Bandipur checkposts (on Tamil Nadu-Karnataka border) to screen passengers entering the state. Any passenger with symptoms during screening will be isolated for further tests at the Gundlupet General Hospital and Chamrajnagar district hospital.

The authorities are screening all passengers crossing into Karnataka from Kerala through Jaalsur and Kallugundi (Sullia) and Thalappady checkposts. A special bus has been introduced to ferry air passengers, who land in Mangaluru airport and are heading to Kasargode. The bus drops the passengers at Thalappady.