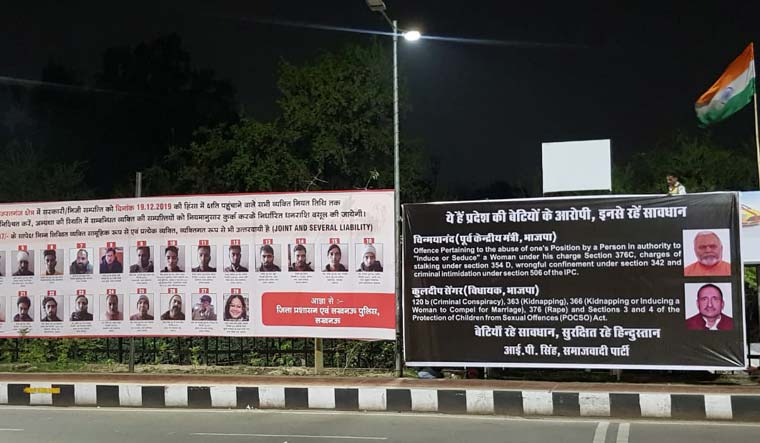 The hoarding erected by I.P. Singh (in black) in Lucknow | Twitter handle of I.P. Singh

In response to these posters against the anti-CAA protesters, I.P. Singh, a spokesperson of the Samajwadi Party, has put up a hoarding of ‘named offenders’ associated with the BJP.

The hoarding, placed in Lucknow's Gomti Nagar area—right next to one with images of anti-CAA protesters—has photographs of Swami Chinmayanand and Kuldeep Singh Sengar.

Chinmayanand was minister of state (home) in the Atal Bihari Vajpayee government, while Sengar was BJP MLA from Bangarmau (Unnao) till recently when his membership of the Vidhan Sabha was cancelled.

The hoarding with a black background was headlined, “These are those accused by the daughters of the state; be careful of them.”

The first photograph is of Chinmayanand, who was accused last year by a law student of raping her. Next to his image, it is written, “offence pertaining to the abuse of one’s position by a person in authority to 'induce or seduce' a woman under his charge section 376 C, charges of stalking under section 354 D, wrongful confinement under section 342 and criminal intimidation under section 506 of the IPC”.

Below Chinmayanad’s photograph was one of Sengar against which is written, “120 b (criminal conspiracy, 363 (kidnapping), 366 (kidnapping or inducing a woman to compel for marriage), 376 (rape) and sections 3 and 4 of the Protection of Children from Sexual Offences (POSCO) Act”.

The hoarding was signed off with the message: Betiyan Rahein Savdhaan, Surakshit Rahe Hindustan (Daughters should remain cautious, India shall remain safe).

The hoarding was removed by the police around 1.30am on Friday.

In a series of tweets explaining the rationale behind the hoarding, I.P. Singh wrote “When demonstrators have no right to privacy, and when despite the orders of the High Court and the Supreme Court, the Yogi government is not removing the hoarding (of anti-CAA protesters), then I have also put up a hoarding on Lohia Chauraha, naming some offenders pronounced so by the state in public interest.”

He followed it up with a tweet, saying that while the court had sentenced Sengar, the state government was intent on removing his hoarding. “There is a difference between what the BJP does and says”. Another tweet said that had the BJP paid as much attention to the safety of girls in the state as it did to his hoarding, girls in the state would be much safer.

I.P. Singh told THE WEEK, "The purpose of the hoarding was to send out a message. That has been done. This government stands with rapists and criminals."

I.P. Singh was formerly a member of the BJP and was known for his frequent anti-party statements. It was one such statement where he referred to Prime Minister Narendra Modi and Home Minister Amit Shah as ‘two Gujarati thugs’ that got him expelled from the party in 2019. He soon joined the SP and was appointed its national spokesperson.