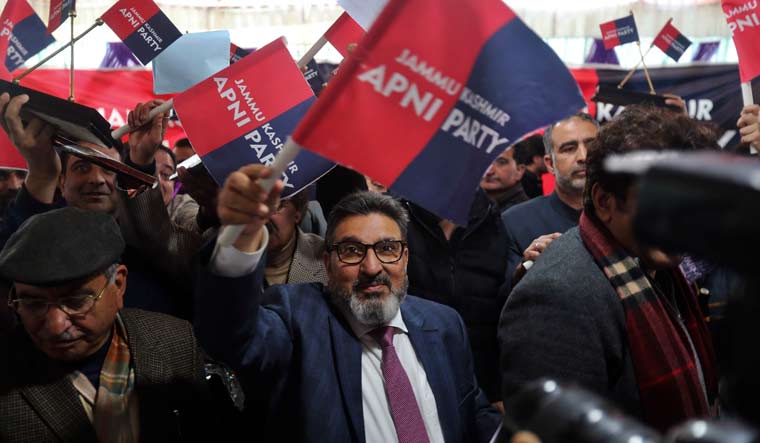 The formation of Apni Party is the first major political initiative in Kashmir since the abrogation of the Article 370, aimed at filling the political vacuum created by the removal and detention of political leaders, especially former chief ministers Farooq Abdullah, Omar Abdullah and Mehbooba Mufti.

Addressing the media on the occasion of party’s launch, Bukhari said the need of the hour is to work towards easing the difficulties of the people after the abrogation of Article 370.

Bukhari said he is someone who takes his own decisions, and joining politics was also his such a decision as he doesn’t take order from others.

“We want to end the mistrust between Srinagar and New Delhi. We are at a stage where Kashmir and Jammu both demand statehood and domicile rights for its citizens.” Bukhari asserted that they have to do business with Delhi irrespective of who is in power.

“If we don’t raise our issues, who will do it for us?” he asked.

The former PDP leader said that they are citizens of Jammu and Kashmir first and members of political parties later. He added that his party was a mixture of experienced ones and new faces.

“We are a regional party with a national outlook.”

Bukhari said issues like self rule and autonomy, which are demands of the PDP and Natinal Conference (NC) for Jammu and Kashmir respectively, was not in the Apni Party’s agenda.

“Our sole aim is to strive for the development and politics of truth,” Bukhari said.

Apni party is not a party of dynasts, Bukhari further said. The president of the party will be elected on a rotational basis.

Bukhari also condemned the slapping of the Public Safety Act (PSA) on the three former CMs, but voices should also be raised about Kashmiri youth and political workers who have been detained under PSA outside J&K, he said.

Asked what was Apani Party’s stand about the revocation of the Article 370, the former finance minister said the matter was pending before the Supreme Court

“If I don’t accept the abrogation of Article 370, will the decision change? We must wait for the Supreme Court’s decision.”

On being compared with Bakshi Ghulam Mohammad, who became prime minister of Jammu and Kashmir after Sheikh Abdullah was jailed by Pandit Jawaharlal Nehru in 1953, Bukhari said that Bakshi had an economic vision which is a dire need of the present times.

The formation of Apni Party is being widely seen in Kashmir as an attempt by the Bharatiya Janata Party (BJP) to fill the political vacuum in Jammu and Kashmir in the absence of the PDP and NC whose leaders have refused to accept the removal of Article 370 and bifurcation of Jammu and Kashmir on August 5, 2019.

There is a general feeling in Kashmir that Bukhari is being backed by the BJP to act as a hedge against the NC and PDP, and to ward off criticism nationally and internally against the decision to withdraw the limited autonomy that the only Muslim majority state in India enjoyed under Article 370.

It remains to be seen how far Apni Party would be able to strike a chord with the people in Jammu and Kashmir in the coming days.