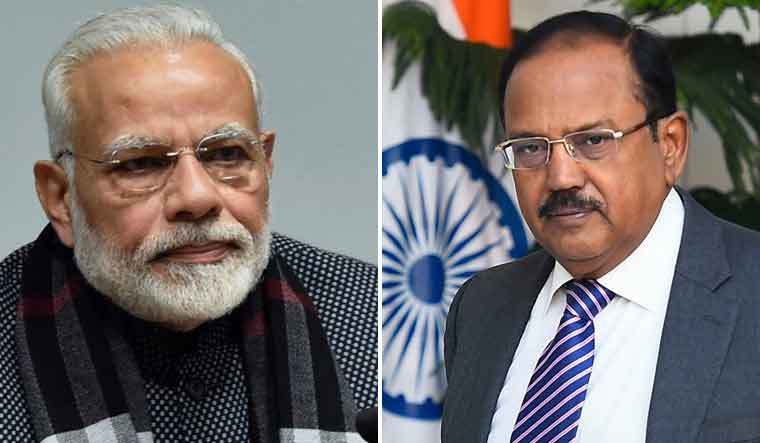 More than 36 hours after violence broke out in northeast Delhi targeting Muslims, Prime Minister Narendra Modi on Wednesday appealed for restraint and peace in the national capital. The prime minister has also asked National Security Adviser Ajit Doval to restore normalcy in riot-hit northeast Delhi where at least 20 people have been killed in the communal violence, officials said on Wednesday.

"Had an extensive review on the situation prevailing in various parts of Delhi. Police and other agencies are working on the ground to ensure peace and normalcy. Peace and harmony are central to our ethos. I appeal to my sisters and brothers of Delhi to maintain peace and brotherhood at all times. It is important that there is calm and normalcy is restored at the earliest," the prime minister said in a series of tweets on Tuesday.

After taking on-the-spot assessment of the violence-hit areas, Doval on Wednesday morning briefed the Cabinet Committee on Security (CCS) headed by Prime Minister Modi about the ground situation in areas under the grip of the communal riots over the amended citizenship law, the officials said. He also briefed the CCS, the country's top most body on strategic affairs, about steps taken to quell the violence and restore normalcy as early as possible, they said.

Reportedly, Doval was given the mandate by the prime minister on Tuesday night. Immediately after taking over the assignment, Doval undertook a late night tour of the riot-hit areas on Tuesday accompanied by Delhi Police Commissioner Amulya Patnaik and newly-appointed Special Commissioner S.N. Shrivastava and other senior officers, the officials said.

He visited the affected northeastern parts of Delhi, including Jaffrabad and Seelampur, where he met police officers and gave them necessary directives, besides meeting leaders of different communities to assuage the tensed situation, the officials said.

Shrivastava is believed to have been handpicked by Doval himself after Patnaik faced flak for failing to curb spiralling violence in the national capital in the backdrop of high-profile visit of US President Donald Trump, they said.

Modi's appeal for peace comes after the Central government and the AAP-led Delhi government have been criticised for lack of proactive measures to curb Delhi violence and targeted attacks.

Earlier in the day, the Supreme Court reprimanded Delhi Police for the clashes in the national capital. The Delhi police comes under the Union home ministry led by BJP leader Amit Shah. The home minister convened a meeting with Delhi Lieutenant Governor Anil Baijal, Chief Minister Arvind Kejriwal, Delhi Police chief Amulya Patnaik and others to address the situation on Tuesday night. However, Shah is yet to issue an official statement on the situation.

On Wednesday, the Delhi High Court also took stern notice of the situation.