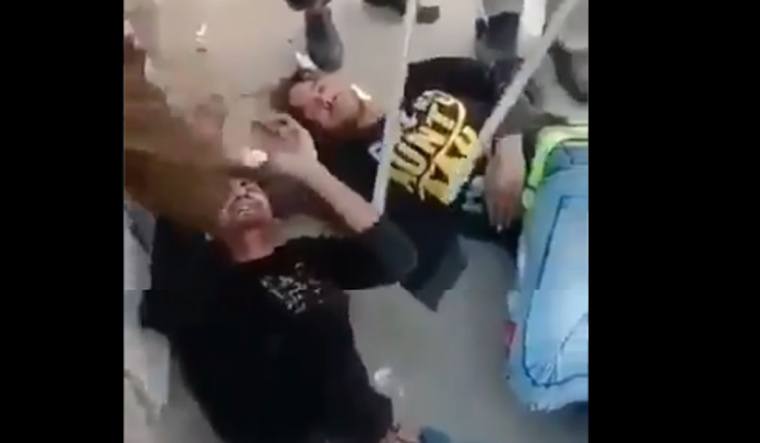 Screengrab from the video of police manhandling two protesters

Several videos have gone viral of clashes between rival groups of protesters over the Citizenship (Amendment) Act in Delhi on Monday. Many of the videos have shown protesters pelting stones, while others showed demonstrators being assaulted.

On Tuesday morning, several Twitter users shared a 30-second video of a group of five men, who appeared to be injured and lying on the road, being surrounded by police personnel in riot gear.

When the protector turns perpetrator, where do we go?!
Shame on @DelhiPolice for disrespecting the value of human life. Is this how the Delhi Police fulfills its Constitutional duty to show respect to our National Anthem?
(Maujpur, 24 Feb)#ShameOnDelhiPolice #DelhiBurning pic.twitter.com/QVaxpfNyp5

One of the men is shown as bleeding. The video shows a policeman capturing the incident on his phone camera as a protester is being made to sing the National Anthem. As this is happening, a voice is heard saying, "sing Vande Mataram!", while another is shouting an expletive of living in Hindustan. A third person standing up is heard, apparently taunting, the men to shout Aazadi (freedom), a popular slogan in the protests against the Citizenship (Amendment) Act.

Sounds of the injured men being hit by a lathi can be heard, while a policeman is shown pulling the hair of one of the men.

It is yet unclear where the video was shot. But not surprisingly, it has evoked strong reactions. Former Samajwadi Party MP and journalist Shahid Siddiqui tweeted the video and claimed the injured men were "Muslim boys". Siddiqui tweeted, "Muslim boys beaten up and forced to sing National Anthem by @DelhiPolice No difference between goons & police. Here you see the stark horrible reality of today’s India."

'Shaheen Bagh Official', a Twitter handle associated with the ongoing anti-CAA protests in Shaheen Bagh, also shared the video. It claimed the incident happened in Maujpur and tweeted, "When the protector turns perpetrator, where do we go?! Shame on @DelhiPolice for disrespecting the value of human life. Is this how the Delhi Police fulfills its Constitutional duty to show respect to our National Anthem?.."

The Washington Post journalist Ishaan Tharoor, who happens to be the son of Congress MP Shashi Tharoor, also shared the video.

While many social media users condemned the incident, movie director Vivek Agnihotri, a popular rightwing face on social media, said the Delhi Police had done the right thing. Agnihotri tweeted, "These actors were trained in hate/bigotry and anti-India riots by the Bollywoodiyas. But it’s the

@DelhiPolice which taught them singing because without song and dance no film is ever complete..."

The video is likely to fuel further criticism of the Delhi Police. Opposition groups and opponents of the Citizenship (Amendment) Act had accused the Delhi Police of not acting proactively to curb the violence in northeast Delhi on Monday.

Delhi ministers Gopal Rai, Imran Hussain and AAP MLAs waited outside the residence of Delhi Lt Governor Anil Baijal on Monday night for over two hours before they met a police officer to demand adequate deployment of police in violence-affected areas.

A head constable was among four people killed and at least 50 others, including several paramilitary and Delhi Police personnel, were injured as violence spiralled over the Citizenship (Amendment) Act in northeast Delhi on Monday.