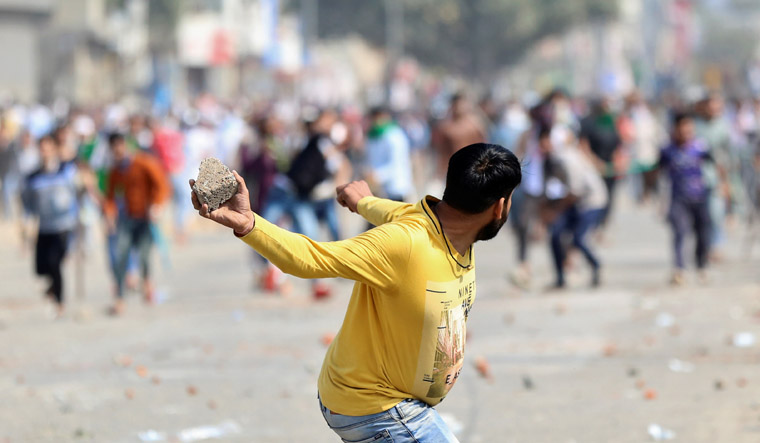 Clashes between pro and anti-CAA protestors in New Delhi | Reuters

Violence broke out across the national capital on Tuesday, with a head constable among four people killed. At least 50 others, including several paramilitary and Delhi Police personnel, were injured as violence spiralled over the amended citizenship law in northeast Delhi, turning it into a battlefield with frenzied protesters torching houses, shops, vehicles and a petrol pump, and hurling stones. This is the second day of clashes in the city, ahead of US President Donald Trump's arrival.

Police fired tear gas shells and also resorted to lathicharge as clashes broke out between pro and anti-CAA groups at Jaffrabad, Maujpur, Chandbagh, Khureji Khas and Bhajanpura. Security personnel conducted flag marches and prohibitory orders were clamped to bring the situation under control. The police have imposed section 144 of the CrPC, which prohibits assembly of four or more people, in areas affected by violence in northeast Delhi.

All schools in northeast Delhi will be closed on Tuesday. "There will be no internal examinations in violence-affected northeast district and all private and government schools will be closed. Have spoken to HRD minister requesting him to postpone the board exams in the district," Sisodia tweeted.

Ratan Lal (42), a head constable attached to the office of the ACP Gokalpuri, died after he sustained injuries during stone-pelting at Gokalpuri. Three other civilians succumbed to injuries in the clashes, a Delhi government official told PTI, adding 50 people with injuries had come to hospital for treatment.

The Delhi Metro on Monday shut three stations on its Yellow Line and a station on Violet Line after students gave a protest call against the violence in northeast Delhi.

How did the violence erupt

The Jamia Coordination Committee, which had given a call for protests outside new police headquarters in Jai Singh Road, submitted a memorandum of demands to the police on Monday and said BJP leader Kapil Mishra should be arrested for allegedly inciting violence in northeast Delhi. They alleged that it was Mishra's speech that fanned the flames of violence. Mishra had said, after anti-CAA protestors blocked the road near Jaffrabad metro station, "We have given a three-day ultimatum to the Delhi Police to get the Jaffrabad and Chandbagh road cleared [of anti-CAA protestors]. Till the US president is in India, we will leave the area peacefully. After that we won't listen to police."

While the violence commenced as clashes between pro- and anti-CAA protestors, it is still not clear who provoked it first. The Indian Express reported Muslim residents of northeast Delhi claiming that "Hindu households were collecting stones and they were being targeted", and the Hindu community complaining that "they were chanting Hanuman Chalisa when Muslim men came and pelted stones”.

Impact of the violence

In northeast Delhi, the roads were strewn with bricks, stones and glass shards. In Maujpur, pro- and anti-CAA protesters indulged in stone pelting and at least three vehicles were torched. Even closed shops were vandalised. At least one house was set on fire and plumes of smoke bellowed from the balcony. A protestor fired multiple rounds in air as a policeman was seen trying to stop him. The man is yet to be identified. Pro-CAA protestors were also seen gheraoing and assaulting a man at Maujpur. Blood was oozing from his head, while some of the attackers raised provocative slogans.

A petrol pump and two school buses were torched at Bhajanpura-Yamuna Vihar border during the rampage by the protestors. At least half a dozen youths were also picked up in a truck by the police. Another identified man could reportedly be seen chased down and assaulted as he ran to escape a mob on an intersection under the Gokulpuri flyover at around 6.30pm. At Bhajanpura Chowk, a fire tender was damaged by the protesters after it responded to an emergency call in the area.

Late on Monday, a mob set a tyre market on fire at Gokulpuri area. A call about the massive blaze was received around 8.30pm, following which 15 fire tenders were sent, the fire department official said. Several shops were gutted in the fire, the official said, adding that it was brought under control by 11.40pm and the cooling process was underway.

Political leaders condemned the violence. Kejriwal urged Union Home Minister Amit Shah and Lt Governor Anil Baijal to restore law and order, and ensure that peace and harmony is maintained in the national capital. "I just spoke to the LG. He has assured that more police forces are being sent. Violence will not be tolerated by anyone. I request people to maintain peace. No solution will come out of violence," Kejriwal tweeted in Hindi.

Very distressing news regarding disturbance of peace and harmony in parts of Delhi coming in.
I sincerely urge Hon’ble LG n Hon'ble Union Home Minister to restore law and order n ensure that peace and harmony is maintained. Nobody should be allowed to orchestrate flagrations.

Condemning the violence, senior Congress leader Rahul Gandhi urged people to show restraint, compassion and understanding, irrespective of the provocation. The Congress also questioned the "silence" of Home Minister Amit Shah over the clashes in Delhi and demanded his resignation. "The violence today in Delhi is disturbing and must be unequivocally condemned. Peaceful protests are a sign of a healthy democracy, but violence can never be justified. I urge the citizens of Delhi to show restraint, compassion and understanding no matter what the provocation," Gandhi tweeted.

The violence today in Delhi is disturbing & must be unequivocally condemned. Peaceful protests are a sign of a healthy democracy, but violence can never be justified. I urge the citizens of Delhi to show restraint, compassion & understanding no matter what the provocation.

Senior Congress leader Priyanka Gandhi Vadra said the whole day was full of violence in Delhi and appealed to Delhiites to maintain peace, asserting that violence only causes harm to the common people and the country.

Lt Governor Anil Baijal instructed Delhi Police Commissioner Amulya Patnaik to maintain law and order in the city. "Instructed @DelhiPolice and @CPDelhi to ensure that law and order is maintained in North East Delhi. The situation is being closely monitored. I urge everyone to exercise restraint for maintenance of peace and harmony," Baijal tweeted.

Delhi Deputy Chief Minister Manish Sisodia said he had never felt so scared in his own city. Delhi BJP chief Manoj Tiwari requested people to exercise restraint in view of the disturbance in Jafrabad, Yamuna Vihar, Karawal Nagar and surrounding areas of northeast Delhi. Delhi minister and Babarpur MLA Gopal Rai also urged people in the area to maintain peace in the wake of clashes over the new citizenship law, saying some people were trying to disturb the atmosphere on purpose.