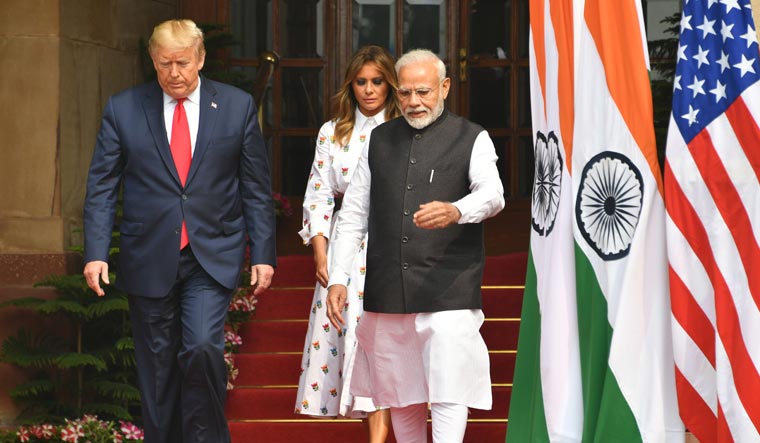 President Trump has said the he will give the highest consideration to India for procurement, technology and joint development in defence | Arvind Jain

US President Donald Trump on Tuesday announced two deals for MH-60 Romeo and Apache attack helicopters worth $3 billion with India.

Sale of 24 MH-60 Romeo Seahawk helicopters for $2.6 billion was mentioned in the joint statement between Trump and Prime Minister Naredra Modi after the delegation level talks in Hyderabad House in the national capital along with six Apache attack helicopters.

In August 2018, days before the maiden 2+2 dialogue between India and the United States in New Delhi, the South Block gave the go-ahead to the Indian Navy to pursue the acquisition of 24 Sikorsky MH-60R helicopters.

The 24 MH-60 helicopters, built by Lockheed Martin's Sikorsky Aircraft, will be procured under the 'government-to-government' route. MH-60 is the US Navy's primary anti-submarine and anti-surface warfare helicopter and is capable of search and rescue and supply missions. These helicopters will come as replacement for 15 Sea King anti-submarine warfare helicopters deinducted from service in 1991 and one Sea King 42B MRH, lost in accident. The current MRHs (mutli-role helicopter) in service—Sea King 42Bs—were inducted in the 1980s when Indian Navy got its aircraft carrier INS Viraat.

"With the finalisation of deal, the Navy is expected to get first six MH 60 helicopters by the end of 2020," said an official.

President Trump has said the he will give the highest consideration to India for procurement, technology and joint development in defence.

An official added that fuselages and secondary aerostructures for the Army’s Apaches will be manufactured at Tata Boeing Aerospace Limited (TBAL) in Hyderabad. TBAL is already manufacturing fuselages for multiple Apache operators around the world.

Deliveries for the Indian Army Apaches are planned to begin in 2023.

The Apache sale is a hybrid procurement—Direct Commercial Sale (DCS) between Boeing and MoD and Foreign Military Sale (FMS) between government of India and the US government.

The FMS contract for the Apache includes munitions, training, aircraft certification, and components including engines, EO sensors and the radar. The direct commercial sale portion of the contract primarily consists of the aircraft (less engines/sensors), logistic support, spares and services.

Official sources maintained that the letter of acceptance (LOA), as it is called under the foreign military sales (FMS) programme of the US government, and the contract between Boeing and the MoD are expected to be signed off since the validity of the two commercial offers expires in March.

The Apaches are produced in Mesa, Arizona.

The US Army Apache fleet has accumulated more than 4.5 million flight hours.

"The FMS contract for the Apache includes munitions, training, aircraft certification, and components including engines, EO sensors and the radar," an official added.