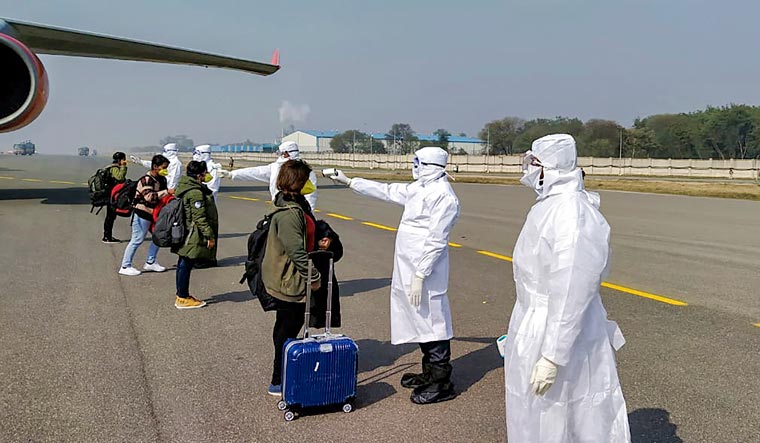 Medics screen Indian nationals after they were brought by an Air India aircraft from China's coronavirus-hit city of Wuhan, at the airport in New Delhi | PTI

India will send a C-17 military transport aircraft to the Chinese city of Wuhan today to evacuate more Indians and deliver a consignment of medical supplies to the coronavirus-hit people. The C-17 Globemaster is the largest military aircraft in the Indian Air Force's inventory. The plane can carry large combat equipment, troops and humanitarian aid across long distances in all weather conditions. Sources told PTI that the aircraft will carry a large consignment of medical supplies to China and bring back more Indians from Wuhan, the epicentre of the coronavirus epidemic. India's national carrier Air India has already evacuated around 640 Indians from Wuhan in two separate flights. According to estimates, over 100 Indians are still living in Wuhan, some of whom decided not to return to India. A sizeable number of countries have evacuated their citizens from China and restricted movement of people and goods to and from China. All the Indians who want to return to India will be brought back in the IAF aircraft today as Indian embassy has reached out to the Indian citizens stuck in Wuhan.

There were tears and defiance too as the women of Shaheen Bagh poured their hearts out to the two Supreme Court-appointed interlocutors on Wednesday, the first attempt to reach out to those sitting in protest against the citizenship amendment legislation for more than two months. Dialogues will continue today. Advocates Sanjay Hegde and Sadhana Ramachandran as well as former bureaucrat Wajahat Habibullah went to Shaheen Bagh, the epicentre of the anti-CAA protests, to speak to the women and attempt to find a way out of the impasse. Many said they would clear the protest site only after the CAA, NRC and NPR were removed. "The Supreme Court has upheld your right to protest. But other citizens also have their rights and those should also be maintained," Ramachandran told the crowd assembled at the spot in south Delhi in large numbers. "We want to find a solution to the problem together. We will listen to everyone," she said in Hindi. Responding to the concerns raised by the women, Ramachandran said all the points will be put forward before the Supreme Court and discussed in detail. "However, I want to say one thing. A country that has daughters like you can never face any threats," Ramachandran said, adding "liberty lies in the hearts of the people".

Russia said it would ban all Chinese citizens from entering its territory from today, in a drastic measure against the spread of the new coronavirus, local news agencies said. "The entry of all Chinese citizens via Russia's state frontiers will be suspended from February 20 for work travel, private travel, study and tourism," said Deputy Prime Minister in charge of health, Tatiana Golikova, according to agencies. She said the decision was taken "because of the worsening of the epidemic in China and the fact that Chinese nationals are continuing to arrive on Russian territory." Several Chinese nationals visit Russia as tourists or live there for work or study and many transit through Russian airports en route to the West. Russia has taken drastic measures to stop the spread of the COVID-19 outbreak which has claimed nearly 1,900 lives in China and around the world. It has already closed its 4,250-km (2,650-mile) border with China. There are no more coronavirus cases in Russia after two women, who returned from China recently, were released from hospital.

5. High-level meeting to chalk out action plan to tackle air pollution in Delhi

Newly appointed Delhi Environment Minister Gopal Rai will convene a high-level meeting of officers today to chalk out an action plan to tackle air pollution in the national capital. Rai, who was given the charge of the crucial environment department in the new AAP government, said reduction in pollution levels will be among the top priority of the Arvind Kejriwal dispensation. An official said that top officers of the environment department have been asked to give a presentation of their plan on how to reduce pollution levels, especially in winter months, in the city. "The new environment minister has called a meeting of top department officers on Thursday to chalk out the plan to deal with city's pollution," the official said. Rai, who was given the charge of environment department by Chief Minister Arvind Kejriwal on Monday, has a challenging task at hand as Delhi's pollution level hovers around "severe" category, especially in winter. Environment is among key departments the Aam Aadmi Party will be focusing in the next five years. In its 'guarantee card' released in the run up to the recent assembly elections, the Aam Aadmi Party had promised to reduce pollution levels in Delhi by three times.

India's Olympic bronze medallist shuttler Saina Nehwal advanced to the women's singles pre-quarterfinals of the USD 170,000 Barcelona Spain Masters with a 21-16 21-14 win over Germany's Yvonne Li. Sania took just 35 minutes to beat her opponent in the first round match. In men's singles, Kidambi Srikanth and Ajay Jayaram sailed into the pre-quarterfinals with easy wins over their respective opponents. While Jayaram beat Christo Popov of France 21-14 21-12 in a 30 minute first round match, third seeded Srikanth defeated compatriot Subhankar Dey 23-21 21-18 in a hard-fought 41-minute contest. Srikanth and Jayaram run into each other in the pre-quarterfinals on Thursday. Pranaav Jerry Chopra and Sikki N Reddy also won their mixed doubles first round match against Denmark's Mathias Christiansen and Alexandra Boje 10-21 21-16 21-17. However, H.S. Prannoy lost to Malaysian Daren Liew 18-21 15-21 to bow out of the tournament. P. Kashyap also bowed out of the tournament after retiring midway in the third game against Ygor Coelho of Brazil. The Indian was training 12-14 then after two rivals have won a game each.

FC Goa on Wednesday became the first team from the country to qualify for the group stage of the AFC Champions League, the continent's top-tier club competition, after beating Jamshedpur FC 5-0 in an Indian Super League match. Ferran Corominas (11th), Hugo Boumous (70th and 90th), Jackichand Singh (84th) and Mourtada Fall (87th) scored for FC Goa to ensure that their side ended the league phase of the ISL on top spot. The top team at the end of the league stage of ISL has been guaranteed a berth in the 2021 AFC Champions League. FC Goa ended the league phase with 39 points after 18 matches. They are now six points clear of ATK who are on second spot with 33 points with one match left to play. Indian clubs like Mohun Bagan and East Bengal have played in the Asian Club Championships, but no team from the country has ever played in the group stage of AFC Champions League since its introduction in 2002 . I-League champions used to play in the preliminary/play-off rounds of the AFC Champions League till this ongoing season but none have been able to qualify for the group stage.