Who is Raghav Chadha, the 31-year-old who could be Delhi's finance minister?

Chadha is one of AAP's most affable faces 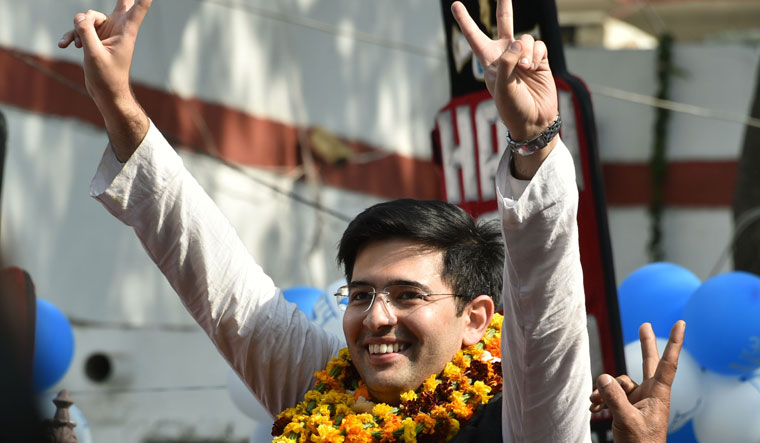 Aam Aadmi Party (AAP) is revelling in its big sweep in the Delhi elections. Arvind Kejriwal's cabinet will see 16 first-time MLAs including Raghav Chadha and Atishi.

Both had contested last year's national polls but lost to BJP candidates. They also were advisers to the AAP government but were forced to step down as the Centre deemed their appointment illegal.

Based on speculation on social media, Chadha, a 31-year-old chartered accountant, could be sworn in as the Delhi's finance minister. Chadha, however, brushed away the rumours.

Chadha, AAP's spokesperson and one of the party's most affable faces, won from the Rajinder Nagar constituency by over 20,000 votes. He is a Delhi University alumnus who specialises in international tax and transfer pricing. He was appointed adviser in the Finance Ministry headed by Manish Sisodia in 2015. Currently, the finance portfolio is handled by Sisodia. Sisodia has also handled portfolios like education, planning, urban development, and revenue.

Most of the portfolios are likely to be reshuffled. This is the first time Chadha contested assembly elections and on his win, thanked the party workers for being the backbone of the party. "From Pandav Nagar to Karol Bagh, these are the areas where I have lived all my life. I have been given an opportunity to make my birthplace my workplace," Chadha had said right ahead of the election that he won on the promise to fight air pollution.

Chadha actively campaigned in his constituency by calling himself 'Rajinder Nagar ka beta'. He also had his mother Alka Chadha by his side, interacting with the locals in Punjabi. Delhi Chief Minister Arvind Kejriwal and AAP's star campaigner Bhagwant Mann had also been on roadshows with him.

Another prominent first-time MLA is 38-year-old Atishi whose alma mater include St Stephen's College and Oxford University. Atishi has said that she would like to work in the education sector.