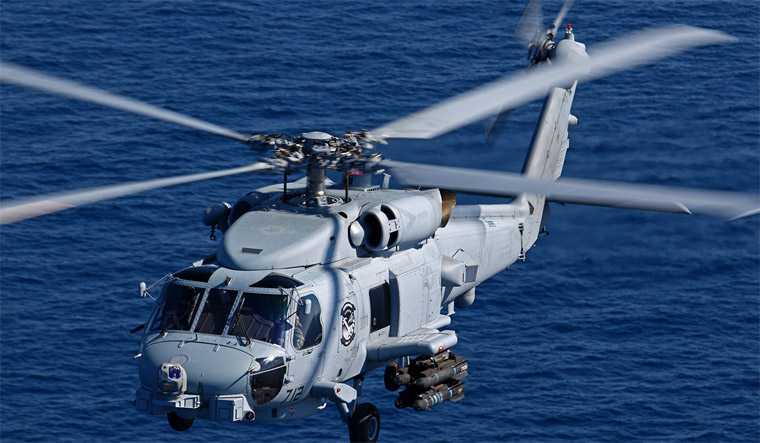 With the White House confirming that President Donald Trump would be visiting India on February 24, speculation has started on what to expect during the trip.

While there has been talk of India and the US concluding a long-anticipated trade deal, agreements on weapons purchases are also being talked about.

Reuters reported on Tuesday that the Narendra Modi government is "set to give final approval for $2.6 billion deal for military helicopters from US defence firm Lockheed Martin", ahead of the Trump visit.

"Modi's Cabinet Committee on Security is expected to clear the purchase of 24 MH-60R Seahawk helicopters for the Indian Navy in the next two weeks," Reuters reported, with an official noting the deal would be a 'government-to-government' one, as the pattern has been with most defence purchases from the US.

The Modi government had cleared the start of negotiations to buy the MH-60R helicopters in August 2018, during its first term. These helicopters can carry equipment to detect submarines and torpedoes to destroy them, in addition to Hellfire missiles to strike surface targets.

The expected purchase of the MH-60R will be a shot in the arm for the Indian Navy, which is currently employing ageing Russian and British-built helicopters for anti-submarine warfare.

On Tuesday, the Trump administration cleared the sale of an 'Integrated Air Defense Weapon System' to India. The IADWS, also known as the National Advanced Surface-to-Air Missile System-II, employs a ground-launched version of the AMRAAM missile, which, incidentally, was fired against Indian fighter aircraft by Pakistani jets in February last year.

The AMRAAM is a medium-range radar-guided missile. The NASAMS-II system will also come with Stinger 'heat-seeking' short-range missiles. The NASAMS-II will be tasked with protecting Indian interests from attacks by cruise missiles and aircraft. NASAMS-II is estimated to have a range of around 25km.

The entire system is estimated to cost $1.867 billion, the US State Department said in a notification.

"India intends to use these defence articles and services to modernise its armed forces, and to expand its existing air defence architecture to counter threats posed by air attack,” the State Department said.

The proposal to buy the NASAMS-II was first approved by India in July 2018 by then defence minister Nirmala Sitharaman.

According to Reuters, "India's defence purchases from the United States have reached $17 billion since 2007 as it has pivoted away from traditional supplier Russia."