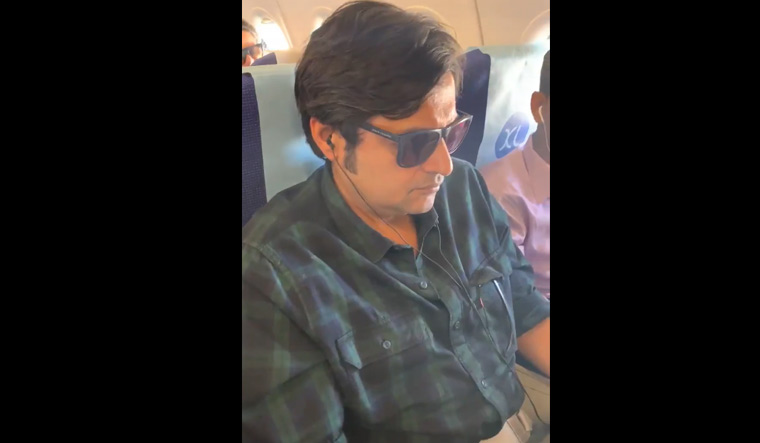 Kamra took to Twitter to share the video of the entire episode. In the video, the anchor can be seen trying to avoid Kamra even as the comic continues to pose him a few questions and call him a “coward” repeatedly.

“First he called me mentally unstable, then he is saying I am watching something,” Kamra is heard saying, adding, “ he (Goswami) is not ready to answer my question viewers.”

“Viewers today wants to know if Arnab is a coward or a nationalist,” the comic questions the journalist, parodying the latter's own style of questioning his panelists in his popular news show.

"I am part of the tukde-tukde narrative. You should deflate me. You should take enemies of the state down. You should make sure the country is in safe hands," the comic is heard saying, even as the journalist continues to remain silent.

“Are you a coward or are you a nationalist,” the comic continues to ask him.

Further, Kamra says he wanted to have a polite conversation with the journalist, but adds that Goswami does not “deserve” his politeness.

This is for Rohith Vemula's mother whose caste you were discussing on your show, the comic is heard saying.

Even as he continues to taunt the journalist for more than a minute, none of the co-passengers are seen interfering.

The comic shared the video on Twitter with the caption: “I did this for my hero...I did it for Rohit”

The video had netizens divided. While some praised Kamra's gut, others were less supportive.

"You may call yourself a comedian but you are much more than just that," said one user.

You indeed have guts man. You may call yourself a comedian but you are much more than just that.

"He ignored u royaly. Didnt even recognize u," wrote another.

He ignored u royaly😁
Didnt even recognize u

"Hilarious how when he is confronted by his imaginary "Tukde Tukde Gang" outside the studio, the man is completely silent," said a user.

Hilarious how when he is confronted by his imaginary "Tukde Tukde Gang" outside the studio, the man is completely silent.

"You didn't "do it for Rohit." You did it to find a way to profit from Rohit's tragic death," wrote another user.

You just showed yourself as a complete ass.

You didn't "do it for Rohit." You did it to find a way to profit from Rohit's tragic death. Like a vulture.

Following the incident, Indigo airlines barred the comic from flying onboard for six months for “unacceptable behaviour”. "In light of the recent incident on board 6E 5317 from Mumbai to Lucknow, we wish to inform that we are suspending Mr. Kunal Kamra from flying with IndiGo for a period of six months, as his conduct onboard was unacceptable behaviour," an official statement from the airlines stated.

We are left with no option but to advise other airlines to impose similar restrictions on the person concerned. https://t.co/UHKKZfdTVS