The couple has set up a big bookshelf in their bedroom 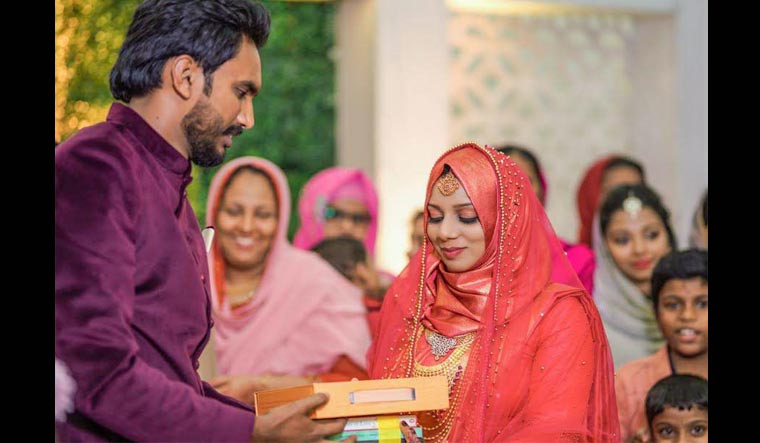 Ijas presenting books to Ajna on her wedding day | Facebook

This bookworm bride demanded books as mehr instead of gold or money. Breaking stereotypes, Ajna Nazim, who got married to Ijas Hakkim, had asked for 100 books as dowry. The list included Quran, Bhagavad Gita, Bible and the Constitution of India.

The 'demand' was put forth by Ajna when they got betrothed in October. Ijas Hakkim, a 26-year-old civil engineer, procured 96 books by their wedding day, December 29. “Mehr is the right of a woman and she can demand anything, which the groom cannot refuse. There are no ground rules that only gold should be presented as mehr,”Ijas told The New Indian Express.

The couple, who got married at Nilamel in Kollam, has set up a big bookshelf in their bedroom. "She also wasn't particular about them being new books. However, I tried getting as many new books as I can. We've now also decided to take part in book exchanges," Ijas told The New Indian Express. The couple now tries to set aside dedicated time for reading.

Mehr is usually a large sum of money, gold or other precious possessions that a Muslim groom gifts his bride.

Ajna, a BEd student, had also included books by Khaled Hosseini and Haruki Murakami and Michelle Obama's biography Becoming in her list.

The couple succeeded in going ahead with the decision with a non-traditional mehr with the support of their parents.

This isn't the first time, however, that a couple has broken convention. In 2016, another Kerala bride, Sahla Nechyil, a political science graduate from the University of Hyderabad, demanded 50 books as mehr. She said she wanted to show the Malappuram Muslims that a wedding can take place without obsessing over the amount of gold transacted between both parties.

Her fiancé sourced the books from various stores in Bengaluru like Blossoms, Gangarams and Bookworm.