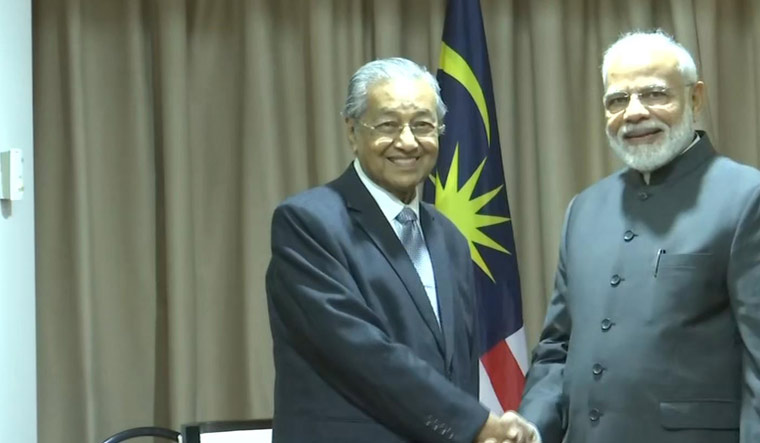 At the United Nations General Assembly in September 2019, while India was still weathering the storm over the abrogation of Article 370 in Jammu and Kashmir, Malaysian Prime Minister Mahathir Mohamad alleged that India has "invaded and occupied" Jammu and Kashmir, and asked New Delhi to work with Pakistan to resolve the issue. The Malaysian prime minister, who has a tilt towards Pakistan, said that there may be reasons for India's action in Jammu and Kashmir, "but it was still wrong." He said despite UN resolutions, Jammu Kashmir has been "invaded and occupied". "Ignoring the UN would lead to others forms of disregard for the UN and the rule of law. India should work with Pakistan to resolve this problem," he said. This, while India has categorically told the international community that the scrapping of Article 370 was an internal matter.

Then, there were other irritants, the extradition of Muslim televangelist Zakir Naik being one. The 53-year-old had left India in 2016, and subsequently moved to Malaysia, where he was granted permanent residency by the government of former prime minster Najib Razak. Naik is wanted by Indian authorities since 2016 for alleged money laundering and inciting extremism through hate speeches. Even as India repeatedly asserted that they have brought up the issue of Naik's extradition with Mahathir in his meetings with Modi, Malaysia claimed otherwise. In September 2019, the Malaysian prime minister said that Modi did not request the extradition of Naik, but India rebutted, saying the issue did come up when the two leaders met in Russia in 2018.

On the Citizenship Amendment Act (CAA), in December 2019, Mahathir had said, "I am sorry to see that India, which claims to be a secular state, is now taking action to deprive some Muslims of their citizenship. If we do that here, you know what will happen. There will be chaos, there will be instability and everyone will suffer."

On the back of all this, bilateral relations with Malaysia—which the Centre had prioritised once under its Act East Policy—are now on the chopping block, with the government placing restrictions on refined palm oil, one of Malaysia's biggest exports, in a move that could likely hit Mahathir hard. As Reuters reported, palm oil is crucial for the Malaysian economy as it accounts for 2.8 per cent of gross domestic product and 4.5 per cent of total exports. At the ongoing World Economic Forum 2020, there would be no meeting between the Indian and Malaysian trade ministers.

According to Times of India, the Indian government is planning further curbs, with the Modi government working on imposing technical standards on microprocessors, and putting in place a quality control order for telecom equipment. The mines ministry is tracking imports and could place curbs if required, the publication reported.

How did the relations spiral?

Singapore and Malaysia have always been at the core of India's interests in its 'Act East' policy, and its attempts to fortify the Association of Southeast Asian Nations (ASEAN) coalition. Trade and anti-terror platforms brought the two countries together, with Modi enjoying a good rapport with Mahathir's predecessor Najib Razak—who once called Modi a "reformist". Under Razak, India and Malaysia discussed almost $5 billion dollar worth of two-way investiments in 2017, the 60th year of India-Malaysia diplomatic relations. Malaysia's annual trade with India was on the rise, having received a boost from a bilateral free trade agreement (FTA) and a regional FTA with India through ASEAN. They spoke of the defence and strategic partnership being “very important in the fight global terrorism, militancy, extremism, including the fight against IS and against any form of extremism”. Razak had said Modi was specifically interested in knowing about the success of Malaysia’s de-radicalisation programme and he presented the Indian leader a book on the specific module dealing with it apart from offering to extend his country’s expertise in the area.

Razak had also hoped that his closeness to India would help him swing the seven per cent vote of Indians in Malaysia, a large number of them Tamil expatriates.

Then, there was the personal equation between Modi and Razak. While wishing to revamp India's Performance Management and Evaluation System (PMES), run by a division at the Union government's cabinet secretariat, Modi had keenly looked to Razak's Performance Management and Delivery Unit, commonly known as PEMANDU. PEMANDU oversaw implementation, assessing progress, facilitating and supporting delivery, driving progress of the Government Transformation Programme and the Economic Transformation Programme launched by Razak, who headed the unit as its chairman.

Modi was also keenly aware of Malaysia's GST programme, which had turned politically disastrous for Razak. In May 2018, Malaysia, in a shock verdict, had ejected Razak and the ruling Barisan Nasional coalition who were in power for almost six decades. This was considered a collateral of the public anger against GST, and corruption allegations against Razak. India was well aware of the implications, with the Modi regime's GST being rolled out in 2017. Mahathir Mohamad, and his Pakatan Harapan coalition, came into power.

Malaysia's palm oil imports were the first casualty of Mahathir's hostility. India is the world’s largest buyer of edible oils, while Malaysia is the world’s second-largest exporter of palm oil, which itself makes up a significant quantity of the country’s exports. The Indian government placed impose restrictions on imports of refined palm oil, a move which could discourage the inbound shipment of the commodity from Malaysia.

Palm oil futures dropped by 2.8 per cent after India announced its restrictions, which would affect the ability for Indian traders to source palm oil from Malaysia. This was the largest decline in these futures in 11 years.

While the refined palm oil from Malaysia faces the restrictions, this, in essence, means India could shift to Indonesia crude palm oil.

Mahathir had admitted the restrictions would hurt Malaysia, and said they would turn to diplomacy to deal with it.