"We want an India where everyone is equal," he said 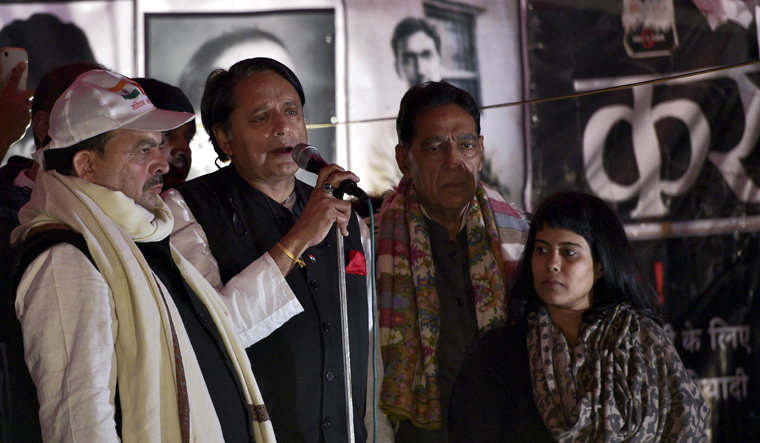 Expressing solidarity with those protesting against the amended citizenship act, Congress leader Shashi Tharoor on Sunday visited Jamia Millia Islamia and Shaheen Bagh and said that the law was against the  ideals of unity espoused by Mahatma Gandhi.

Tharoor later travelled in metro to reach JNU where he addressed the students and condemned the violence by a masked mob on January 5.

He said the December 15 police action against the students in Jamia is a "blot on the nation". After visiting the university, he visited Shaheen Bagh to express solidarity with the protesters.

Terming the Citizenship Amendment Act "discriminatory", Tharoor asserted that it is against the ideals of unity espoused by Mahatma Gandhi.

"Whatever happened on December 15 is a blot on nation. Without any provocation, without any intimation to the vice chancellor, they (police) entered hostels and attacked women students. Students studying in library were attacked, which is a 'shame, shame, shame' and not acceptable at all," he told the crowd.

Attacking the act, the Thiruvananthapuram MP said the Centre's step is discriminatory and an effort to marginalise "one community". "That is why we opposed the introduction of the bill in Parliament, as it brought religion in the Citizenship Act for the first time," he said.

Tharoor said he did not want any section of society to be reduced to second class citizens. "We shall stand for the values we cherish and for the humanity, and above all we should stand for Bharat (India)," he added.

Tharoor, who addressed the crowd in Hindi and English said, "Religion was nowhere mentioned in the Citizenship Act until the BJP-led government incorporated it in the CAA. This is not something we can accept."

"The CAA betrays the ideals of Mahatma Gandhi, who sacrificed his life for the unity of the nation; the unity of Hindus and Muslims. India, which Mahatma Gandhi wanted to see, will not be the India after the introduction of religion in the CAA," he said.

He was accompanied to Jamia by Delhi Pradesh Congress Committee president Subhash Chopra. Tharoor claimed the introduction of religion in CAA will be followed by the all-India NRC which puts onus on one community to prove its citizenship.

"That is not the India that our founding fathers wanted to see, that is not the India that people in the Congress, including myself, will ever like to accept. We want an India where everyone is equal. It should not matter whether you are a Muslim or Hindu, a Christian or Sikh. If you are Indian, you have the same rights and same privileges," he said.

"Don't let anyone tell you that you have lesser rights than anyone else has in this country. You have the same rights as a Muslim or a Hindu or Christian. That is India, the Republic of India, the India of the Constitution," he said.

He said students studying in the university should always remember that Jamia was a seat of resistance to the British and Mahatma Gandhi came here and started the Khilafat Movement.

"You all should know that when Gandhi came here, he had said Jamia should continue fighting and if it needs money, I will go with a begging bowl and I will save Jamia. Today Jamia is one of the great universities of our country," he said.

At Jawaharlal Nehru University, he condemned the events that unfolded last Sunday and demanded action against the accused.

Terming citizenship law a religious test, he said it is something that is happening in the country for the first time.

"It is the first time that a religious test has been introduced into the definition Indian citizenship," he said while delivering a talk on the amended citizenship law.

"Never before in our country has it mattered what your religion was to qualify to be an Indian citizen. The fact that this government doesn't understand that is the biggest shame of all," he said.

"We have Amit Shah even today challenging Rahul Gandhi and Mamata Banerjee, 'Can you show me anything in this bill that takes away anybody's citizenship? ' That is a wrong question," he said.

"We have statements by sympathisers of the government saying this is upholding India's fine standards, giving asylum to persecuted minorities. I used to work for refugees at the UN.I know something about persecution and I know what the response to persecution is," he said.

He said the response to persecution is giving asylum to people from every country where they face persecution, never to send them back and never to ask them which religion they belong to.

At JNU, some students also protested against Tharoor for his tweet on Islamist extremism.

"Our fight against Hindutva extremism should give no comfort to Islamist extremism either. We who're raising our voice in the #CAA_NRCProtests are fighting to defend an #InclusiveIndia. We will not allow pluralism &amp; diversity to be supplanted by any kind of religious fundamentalism," he had tweeted.