On the night of JNU attack, in a span of minutes, two FIRs were filed against JNUSU members

Two FIRs were registered at 8.44pm and 8.49pm on the same night as the attack 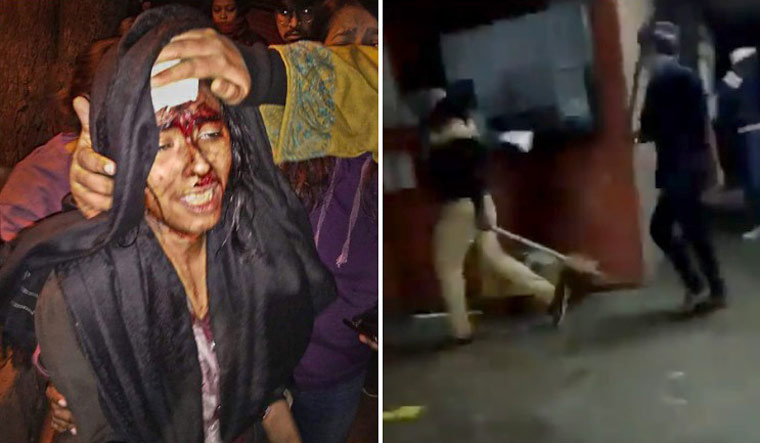 Two FIRs were registered by Delhi Police on the night of January 5, within a span of few minutes, taking cognisance of complaints filed by JNU authorities. Officebearers of the student union, including JNUSU president Aishe Ghosh and vice president Saket Moon, were named in connection with alleged vandalism on premises on January 1 and 4. One compliant was lodged on January 3 for switching off the server, while another complaint was registered on January 4 for vandalising the server room, police officials told PTI.

Incidentally, this was also the time when police—who were severely criticised for inaction—was called in to restore law and order in the university and several injured students, including Ghosh, were rushed to the hospital. Violence had broken out at JNU on Sunday night as masked men armed with sticks and rods attacked students and teachers and damaged property on the campus. The left-controlled JNUSU and the RSS-affiliated Akhil Bharatiya Vidyarthi Parishad (ABVP) blamed each other for the violence that continued for nearly two hours. At least 28 people, including Ghosh, were injured as chaos reigned on the campus for nearly two hours.

The general diary reference in police records showed the FIRs were registered at 8.44pm and 8.49pm on complaints filed by the varsity's security department on January 3 and January 4 respectively. These were related to alleged incidents of vandalism on January 1 and January 4 respectively. Ghosh or any students' union office bearer's name does not figure in the accused column of the FIRs though they were named in the complaints. Police said the two FIRs were on Tuesday transferred to the Crime Branch, which is probing the January 5 violence.

Moon alleged that the administration is selectively targeting some students and denied their involvement in the vandalism of server room. "I am not scared of the vice chancellor. Even if they file 70 FIRs for 70 days of protests against the fee hike, we will continue our struggle," Ghosh said.

In connection with the armed thuggery, the Delhi police had registered an FIR against unidentified persons on Monday for rioting and damaging property. According to the FIR, students were protesting against a hostel fee hike for the last few days. According to instructions issued by the High Court, no protest is allowed within a 100-metre radius of the administrative block of the university. "On Sunday at 3.45pm, a police team headed by an inspector, which was deployed in the administrative block, got information that a few students had gathered at the Periyar hostel and a fight had broken out between them. They also vandalised the hostel building," the FIR stated.

CPI(M) leader Sitaram Yechury alleged that the FIRs have been filed as an "afterthought". Without naming Ghosh, AIMIM president Asaduddin Owaisi said it was "unfortunate" that a case had been filed against the "girl who had 18-19 stitches on her head", instead of registering cases of trespass and attempt to murder on the attackers. "This is injustice, I condemn this behaviour. It is completely wrong," he said.

The opposition Congress said, "40 hours since the violent attacks in JNU and the Delhi Police has failed to arrest a single perpetrator, despite the glaring evidence."

"Is the police so incompetent under Amit Shah? Instead they file an FIR against a victim of the attack. Disgraceful (sic)," the party said on its Twitter handle.

Delhi Police Crime Branch, meanwhile, sought details of students and faculty members who were injured in the violence from the varsity administration to record their statements and also requested for a separate room in the campus for carrying out investigation related to the Sunday attack, police said. The Crime Branch team also met the vice chancellor.

Police also issued a public appeal seeking pictures, footage or any information related to Sunday's violence in JNU campus that left 34 people injured even as forensic teams looked for evidence. Joint Commissioner of Police (Western Range) Shalini Singh, who is heading a fact-finding committee, visited the JNU campus and spoke to students and teachers.

A fringe right-wing group, Hindu Raksha Dal, has purportedly taken responsibility for the attack on JNU students in a video posted on social media. The video, which has gone viral since, shows a man identifying himself as Pinki Chaudhary saying that those who resort to "anti-national activities" will be treated in the same way that JNU students and faculty were. He later told news channels that others involved in "anti-national activities" will face similar attacks. There was no immediate reaction from the police on Chaudhury's claims.

Security has been strengthened in the campus following the violence. Police personnel in large numbers were present near various gates of the university to ensure that no untoward incident takes place. Police has barricaded the gates and only visitors with valid identity cards are being allowed entry.

An FIR has been registered against unidentified people in connection with the January 5 violence. Police is taking the help of video footage as well as face recognition system to identify the culprits, sources said. "Since there are no CCTV cameras installed inside the hostel, we are relying on the accounts of the witnesses and the videos that were shot by the witnesses on their mobile phones. We will also have to verify the authenticity of the videos that went viral on social media platforms," an officer said.

Demonstrations over the attack were held in various parts of the country. Members of the Akhil Bharatiya Vidyarthi Parishad and its rival National Students' Union of India clashed in Ahmedabad during a protest organised by students' wing of the Congress outside the office of the RSS-affiliated outfit in the city's Paldi area, leaving 10 people injured. Both the student bodies blamed each other for the incident. While Gujarat NSUI said it general secretary Nikhil Savani sustained serious head injuries, ABVP alleged it was a "pre-planned" attack by NSUI, similar to the one in JNU, and more than five members were injured.

In Mumbai, police said people protesting against the JNU violence since Sunday night were evicted from Gateway of India and "relocated" to the Azad Maidan on Tuesday morning as roads were getting blocked and tourists and common people were facing problems. In a brief statement, JNU Vice Chancellor Kumar said, "Our heart goes out to all injured students. The incident (violence) is unfortunate. I would like to tell students that JNU campus is a secure place. "I urge all students to come back to the campus. Let us put the past behind," he said.

After the attack there has been a demand for several quarters, including the students and faculty, for his resignation.

In a scathing statement, the JNU students union alleged the administration has remained "completely silent" on the January 5 attack on students and teachers, "and instead has now tried to criminalise the peaceful students of JNU, completely exposing the saffron nexus of the ABVP-administration".

"Not only has the administration washed its hands off the violence committed by its henchmen, it has tried to blame the overwhelming majority of protesting students and file another fake complaint," it said. The students outfit again demanded removal of the VC and an inquiry against him. "The Delhi Police and the home ministry also must be held accountable," it said.