The bandh has been called by trade unions like INTUC, AITUC, HMS, CITU and so on 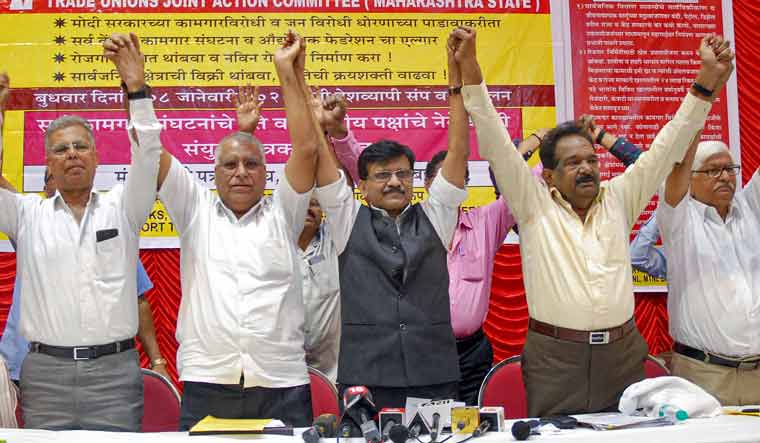 The Bharat Bandh called by ten trade unions belonging to the opposition camp tomorrow is expected to have an added impetus, with the addition of CAA-NRC to the agenda of agitation, and students' and farmers' organisations lending their support to the strike, even as the Centre has warned its employees of action against them if they participate in the strike.

The All India General Strike, according to the participating trade unions, is likely to see the participation of at least 25 crore people, and coming as it does in the backdrop of nationwide protests against CAA-NRC and the alleged assault on students in universities, it will not be purely based on economic issues, as had originally been planned, but will have a distinct political flavour.

The countrywide bandh has been called by ten trade unions that belong to the Opposition camp, with the RSS-affiliated Bharatiya Mazdoor Sangh staying out of it. The unions — INTUC, AITUC, HMS, CITU, AIUTUC, TUCC, SEWA, AICCTU, LPF and UTUC — have added to their list of issues CAA, NRC and NPR, demanding immediate revocation of CAA and withdrawal of NPR and NRC.

“Any employee going on strike in any form would face the consequences which, besides deduction of wages, may also include disciplinary action,” said an order issued by the Ministry of Personnel. The order, issued to all central government departments, said existing instructions prohibit a government servant from participating in any form of strike.

“All officers are also requested not to sanction casual leave or any other kind of leave to the officers and employees if applied for, during the period of the proposed strike, and ensure that willing officers are allowed hindrance free entry into the office premises,” said the order.

Amongst the demands in the originally drawn list of the unions are a national minimum wage of Rs 21,000 per month, pension to all, restoration of an old pension scheme, generation of new jobs, controlling the price rise of essential commodities, a universal public distribution system, strengthening of welfare boards for unorganised sector workers and increased budgetary provision for MNREGA and agriculture.

The ambit of the strike has widened, with workers from the unorganised sectors, and student and farmer organisations pledging support. Jan Ekta Jan Adhikar Andolan, a national platform of workers, peasants, agricultural workers, youth, students, women, Dalits, tribals, social movements and progressive individuals, having a membership of 20 crore, has called upon the general public to join the strike.

The platform of peasant organisations, All India Kisan Coordination Committee and the joint platform of student organisations will be a part of the strike by observing rural bandh and educational strike, respectively. Students' groups and elected office-bearers of some universities have extended their support based on their agenda concerning raised fee structures and opposition to the commercialisation of education.

Banking services are expected to be hit. Educational institutions could see an impact, with several students' and teachers' associations pledging support. Also, transportation could be hit in some states.

Union Labour Minister Santosh Gangwar had invited the trade union leaders for a discussion on January one. However, after the meeting, the unions conveyed their resolve to organise a bandh.

In the meeting, the minister had stated that the government has been taking all steps for the welfare of workers and legislations on labour codes are a part of that.

The unions, however, strongly contradicted the statement of the minister and stated that the labour codes are a design of imposing slavery on the workers and it is not acceptable to the trade union movement of the country.

The Left parties — CPI(M), CPI, CPI(ML)L, Forward Bloc and RSP — had given a call for a week-long agitation against the “assault on the Constitution” and the “mounting miseries on the people due to economic recession,” the protest culminating in the general strike. The Congress too has come out in support of the strike. However, West Bengal Chief Minister and Trinamool Congress supremo Mamata Banerjee, has said that while her party will keep protesting against CAA-NRC, it will not support the bandh.