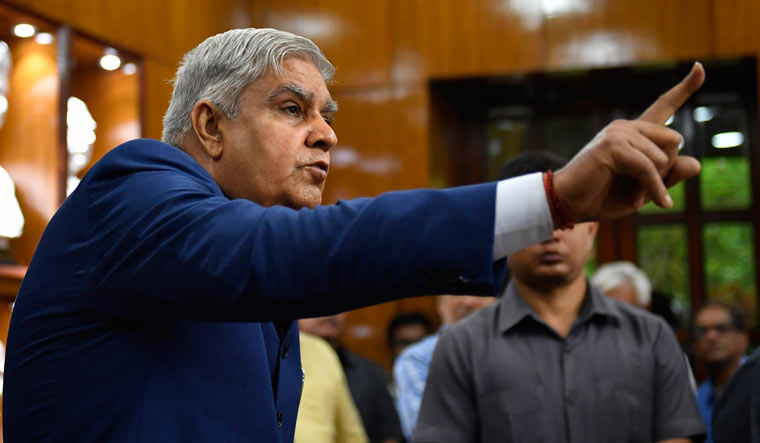 West Bengal Governor Jagdeep Dhankhar has given his consent to two bills passed by the state assembly that was pending before him for months. However, the governor has refused to sign two important bills on lynching and SC/ST Commission, for which inputs are yet to be provided by the West Bengal government.

The Mamata Banerjee government had recently given clarifications on two bills which had been pending for around three months. One of the bills was with regard to the Hindi University in West Bengal and the other concerning lifts, escalators and travelators.

The first bill aims at setting up a Hindi University in Howrah district of West Bengal, and the other to ensure the safeguard of people with safety measures and maintenance by making it mandatory for men to be deployed at all places that have elevators or lifts.

However, governor Dhankhar sought inputs before signing both the bills under article 166(3) of the Indian Constitution which enables him to use his discretionary power.

The bill was sent to the governor in September, and he had sought inputs from the state government soon after. However, the West Bengal government, sources said, ignored the objections of the governor and was making preparation to resend the bills to him.

Two other bills—on lynching and on SC/ST Commission—also met with the same fate as the governor refused to sign the bill even after they were passed by the assembly. There was a chance of unprecedented legal logjam because of the tussle.

Relations between Chief Minister Mamata Banerjee and Governor Dhankhar have soured since, with both having public outbursts against each other over halting of legislation work, on the point of courtesy and on the questions of superiority of protocol of both the offices.

While Banerjee brought the matter to Delhi, in Parliament and to the office of president, Dhankhar remained adamant and continued spewing venom on the issue of prestige of his office. Finally, Education and Parliamentary Affairs Minister Partha Chatterjee met with the governor at the insistence of Banerjee and discussed threadbare on the relations between the Raj Bhavan and the state secretariat.

The governor, sources said, categorically told Chatterjee, who is also secretary general of the TMC, to fall in line so far as official protocol and constitutional deliberations are concerned.

Chatterjee reportedly held a meeting with chief minister and further inputs to the governor were sent regarding the two bills passed in September. Dhankhar finally gave consent to these bills on January 2.

However, his office categorically said, “(Regarding) the West Bengal (Prevention of Lynching) Bill and the West Bengal State Commission for scheduled Caste and Scheduled Tribes Bill, further headway can be made only after the inputs are made available by the state government and state legislature, as such inputs are exclusively with them as regards the issues raised.”

The governor further observed that the delay was being occasioned in the consideration of those bills for want of information and “attention of the concerned has been drawn severally and at all levels”.

In a veiled warning, the governor said that unless he received the clarification of his objections, he would not sign the other bills.

“It is expected that the highest priority will be given so that the legislative work does not suffer. All inputs warranted by the rules of business under article 166(3) of the constitution be duly complied and made available in time,” he said.

Neither the governor nor the state government has disclosed what clarifications have been sought in the matter.

Sources, however, said that regarding the Hindi University bill, the government wanted to know what kind of curriculum would be followed as a similar demand for an Urdu University has also come from the same district and is under the consideration of the state government.

The lynching bill also requires a slew of clarifications which the governor is yet to get from the government.

Dhankhar said that in order to clear the bills, the government must give absolute priority to the work of the legislature and give clarifications in time.