Civil disobedience with a smile: Arundhati Roy on complaint filed against her NPR remark

"When they visit your home for NPR, give them some different name" 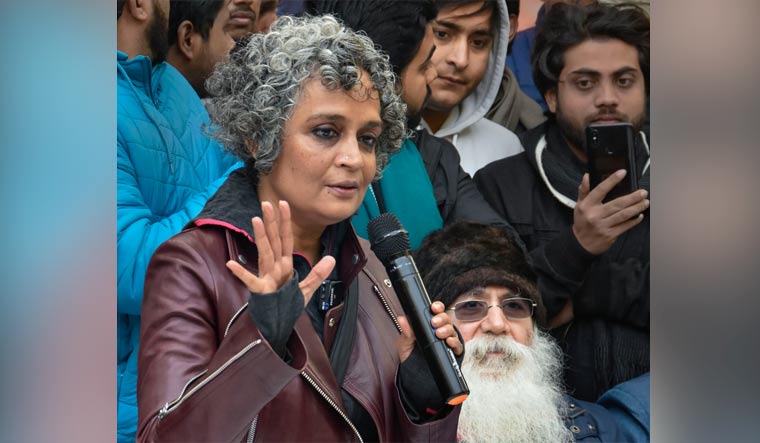 Writer-activist Arundhati Roy speaks as economist Arun Kumar, seated next to her, looks on during a protest against the amended Citizenship Act at Delhi University campus in New Delhi, Wednesday, Dec. 25, 2019 | PTI

Author-activist Arundhati Roy on Wednesday claimed that the National Population Register (NPR) will serve as a database for the NRC and asked people to oppose the former by furnishing wrong names and addresses. Addressing a protest gathering at Delhi University, she also claimed that the National Register of Citizens (NRC) was targeted against the Muslims of the country.

Roy said that officials will visit people's homes under NPR exercise for taking their names, addresses and other details. "They will visit your homes, take your name, phone number and ask for documents like Aadhaar and driving licences. The NPR will become database of NRC. We need to fight against it and have a plan. When they visit your home for NPR, and ask for your name give them some different name... .For address, say 7 RCR. A lot of subversion will be needed, we are not born to face lathis and bullets," she told the protest meeting.

Later, on Thursday, a lawyer filed a complaint against Roy for her remarks at a Delhi court, reported ANI. “The above statement is nothing but a deliberate and malicious act intended to outrage religious feelings of Muslims,” Rajeev Ranjan claimed in his complaint.

After the complaint was filed, Roy issued a statement. As accessed by Scroll.in, she said: This is with regard  to what I said while speaking at Delhi University on December 25th 2019 about the National Population Register (which the nation now knows is officially the data base for the National Register of Citizens). I said that in his speech on December 22 at the Ramlila Grounds in Delhi, Prime Minister Narendra Modi blatantly lied to us about the National Register of Citizens and the non-existence of Detention Centres. I said that as a response to those lies we should collectively enter ridiculous information when they came to gather our personal data for the NPR. What I was proposing was civil disobedience with a smile. All the mainstream TV channels that were present have footage of my entire speech. Of course they did not air any of it. They just excited themselves and everybody else by commenting on it and misrepresenting it and lying about it. This has led to calls for my arrest as well as TV crews laying siege to my home. Fortunately my speech it is up on YouTube."My question is this: is it ok for the Prime Minister of this country to lie to us but a criminal offence and a security threat for us people to have a laugh? Amazing times. Amazing mass media.

Roy accused Prime Minister Narendra Modi of telling a "lie" at his Ramlila Ground rally on Sunday that his government never said anything about the NRC process, and that there are no detention camps in the country. "He told the lie knowing that it will be caught, but still he lied because he has the media with him which will not question him."

Roy said that those protesting against the amended Citizenship Act and the NRC need to work for getting a "proper commitment" from various states that they will not implement these measures. She alleged that after widespread protests against the CAA and NRC in the country, the government has been trying to push the provisions of NRC and CAA through NPR.

Alleging that Muslims are being attacked and oppressed by the police in Uttar Pradesh, she claimed, "Attacks are taking place on Muslims in UP. Police are going house to house ransacking and looting." She said that CAA and NRC were not only against Muslims, but against dalits, tribals and poor people in the country.